The Risks of Flavored JUULpods 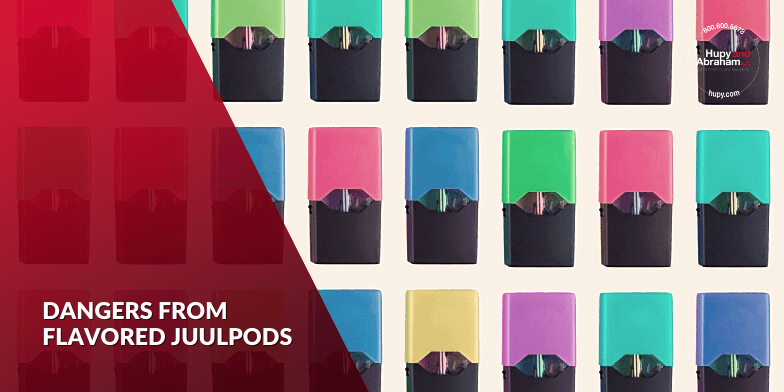 JUUL Labs has stopped selling most flavored JUULpods in the United States. As of October 2020, only menthol and Virginia tobacco remained available for sale on JUUL’s website.

JUUL Labs sold fruit and dessert flavored vaping pods in the United States until 2018. The sweet-sounding flavors sounded innocent and delicious, but may not have been safe. Some of the flavors that were on the market in the United States included fruit medley, mango, cool cucumber, mint, and crème brulee.

What Was in Flavored JUULpods?

Most manufacturers, including JUUL Labs, do not provide a full list of ingredients that create the flavor of different vaping products. Accordingly, researchers used mass spectrometry to determine what was in different JUULpods.

In a December 2019 study published in Scientific Reports, researchers found more than 40 chemicals present in varying degrees in seven flavors of JUULpods. The substances included hydrocarbons and volatile organic compounds. Some of these chemicals have industrial uses and are known to be harmful to humans when they are inhaled.

Researchers exposed human lung tissue to vapor from flavored e-cigarette pods. They found that flavored JUULpods may cause:

Menthol JUULpods, which is still sold by JUUL Labs, was equally as dangerous to human lungs as the flavored pods which are no longer sold in the United States, according to researchers.

Research indicates that the chemicals used to flavor JUULpods may be dangerous, but it isn’t only flavored pods that carry a health risk. JUULpods contain nicotine and may also contain other dangerous substances such as formaldehyde, heavy metals, acrolein, menthol, and diacetyl.

Accordingly, JUUL users remain at risk for injuries such as:

Psychological impacts from addiction, such as anxiety and depression, may also occur.

What to Do After a JUUL Illness or Injury

Children under the age of 18 cannot file their own lawsuits in Wisconsin. However, parents can bring lawsuits on behalf of their children and pursue recoveries that will help them with their current and future medical issues. If your child is over the age of 18, then you may share this article with them and advise them to contact an attorney for a free, no-obligation consultation.

Juul has been accused by researchers of marketing its products as safe and targeting its marketing to minors. The company allegedly tried to convince children, teens, and adults that its products were safer than other tobacco products.

We will go above and beyond the call of duty to help you or your child get the full and fair recovery you deserve from JUUL Labs. We will fight for a full recovery of past, present, and future medical costs, lost income, out-of-pocket costs, physical pain, emotional suffering, and other appropriate damages.

If you or your child were hurt, then we encourage you to contact our experienced lawyers for a free, no-obligation consultation. We would be happy to meet with you in any of our 11 Midwest offices, by phone, in your home, or through a virtual meeting. Call us or fill out our contact form now to get started.