Can Vaping Cause Seizures? 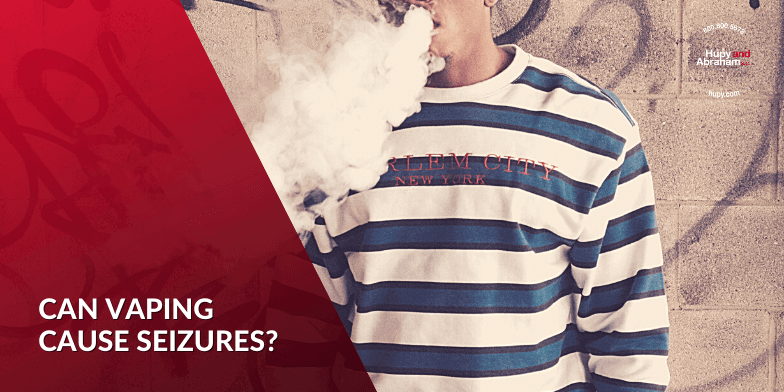 In April 2019, the U.S. Food and Drug Administration (FDA) notified consumers and health professionals of a “potential emerging safety issue” associated with e-cigarettes. The FDA warned of potential seizures or convulsions among e-cigarette users, and the agency raised a particular concern about seizures and convulsions in children and young adult users.

The FDA received approximately 127 reports of seizures and other neurological problems allegedly related to e-cigarette use between 2010 and August 2019. While the FDA did not have enough information to draw conclusions, it urged people to be aware of the risk, particularly because of:

In May 2019, the parents of a Florida teenager filed a lawsuit against JUUL and two tobacco companies after their 15-year-old daughter developed seizures. The parents alleged that the child didn’t know there was nicotine in the product until she was already addicted to vaping and experienced seizures.

The Risk of Seizures

Seizures happen when there is a sudden electrical disturbance in the brain. Typically, seizures last from a few seconds to a couple of minutes. However, more prolonged seizures can occur and are a medical emergency. Your doctor may diagnose you with epilepsy if you suffer two or more seizures.

The effects of seizures vary for teens, young adults, and adults. According to the Mayo Clinic, during a seizure a person may experience:

How E-Cigarette Use May Cause Seizures

While the possible connection between e-cigarettes and seizures remains under investigation by the FDA, some experts describe two possible ways that e-cigarette use may cause seizures. Specifically, experts warn that:

Vaping is still a relatively new issue. Researchers indicate that patients with neurological issues were rarely asked about e-cigarette use earlier than 2016. Additional information may become available as the research and reporting evolve.

Seizures are just one possible health risk that may occur in young people who vape. JUULing may also cause other serious health concerns, including:

If your child has a seizure, addiction, cardiac, or respiratory issue, then now is the time to take action. Talk to your child’s healthcare provider about your options for dealing with the addiction and health consequences of vaping.

Additionally, we encourage you to contact a JUUL lawyer. JUUL allegedly marketed its e-cigarette products to minors prior to 2018 by using marketing themes that attracted teens, using social media influencers to reach teens, and selling flavored JUULpods that appealed to teens. During this time, JUUL also marketed its products as safe. Since then, teenagers and young adults have suffered some of the medical consequences described above.

Minors do not have the right to bring their own lawsuits until they reach their 18th birthday, and young adults often need guidance from trusted adults when handling serious issues such as legal cases. Accordingly, we encourage you to reach out to our JUUL injury lawyers if your child has been hurt. Your child may be able to recover financial compensation for JUUL-related injuries. Call us or reach out to us through this website to schedule your free legal consultation.