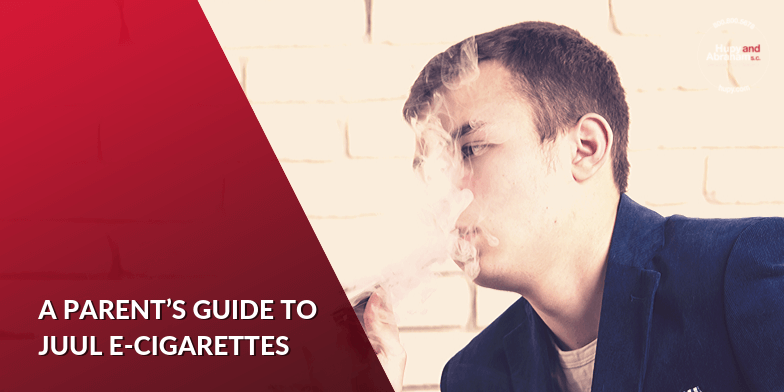 Electronic cigarettes are—by far—the most common type of tobacco product used by middle and high school students in the United States. To protect our children, we must find out why e-cigarettes are so popular, what health effects our children may suffer, and how to protect their legal rights.

What Is a JUUL Device?

JUUL Labs is the largest manufacturer of e-cigarettes. JUUL devices look like USB flash drives and are designed to be charged in USB ports. This design makes JUUL e-cigarettes easier to hide from adults than traditional cigarettes and other types of e-cigarettes.

Disposable JUULpods that come in different flavors and nicotine strengths are inserted into the device, and then the user can inhale the vapor. This is known as vaping or JUULING. The JUUL device is easy to use and does not create the unpleasant smell or mess of a cigarette.

Researchers from Stanford University School of Medicine found that JUUL e-cigarettes have a “cult level of popularity among school-aged adolescents.”

While JUUL Labs maintains that its products are meant for adults, the data indicates that many children are using e-cigarettes, and that may be due to the company's marketing practices.

Much of JUUL Labs' pre-2018 marketing has been removed from its website and social media accounts. However, Stanford researchers looked at JUUL Labs' advertising from when it came to the market in June 2015 until November 2018. After studying the company's website; social media sites including Twitter, Instagram, and Facebook; hashtags, and customer directed emails, the researchers found that JUUL Labs intended to reach the youth marketing and that:

In September 2019, the Center for Tobacco Products and the U.S. Food and Drug Administration (FDA) notified JUUL Labs that it had, “…represented that JUUL products are free of a substance, have a reduced level of or exposure to a substance, and/or that JUUL products present a lower risk of tobacco-related disease or are less harmful than one or more other commercially marketed tobacco products.”

To reach this conclusion, the FDA relied on evidence presented to a U.S. House subcommittee that included several instances of JUUL Labs representatives talking to students and saying things like:

Other evidence also led to the FDA to this conclusion.

While JUUL Labs may have marketed its e-cigarettes as safe, vaping is not safe.

JUULpods, even the mango flavored JUULpods, contain nicotine and other harmful substances. Some JUULpods contain as much nicotine as a pack of traditional cigarettes. Additionally, other ingredients such as formaldehyde, heavy metals, acrolein, menthol, and diacetyl can cause health problems including:

You Can Protect Your Child’s Legal Rights

In July 2019, eight Wisconsin teenagers went to the hospital with coughs, trouble breathing, and extreme fatigue. Vaping was the suspected cause of their illnesses. Nationwide, and here in Wisconsin, other teens have begun to experience the adverse health effects of e-cigarettes. Others may get sick in the future.

Children under the age of 18 do not have standing to file a lawsuit in Wisconsin. Instead, it is up to you as your child’s parent or legal guardian to take action to protect your child’s future.

You may be able to sue JUUL Labs for the lung condition and addiction that your child suffers from its products.

Our experienced Wisconsin injury lawyers want to help you help your child. Call us today and set up a free consultation in our Milwaukee, Appleton, Green Bay, Madison, or Wausau office or let us come to your home or child’s hospital room. Let’s talk about what happened, what your child’s legal options are, and how to start a lawsuit, if appropriate.