The Truth About Trasylol 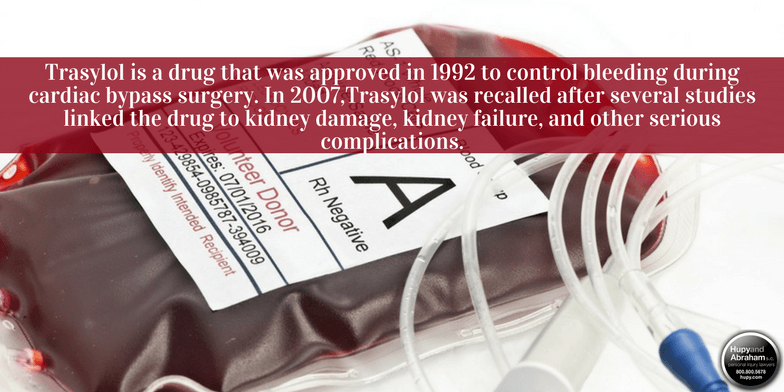 Trasylol is a drug that was approved in 1992 to control bleeding during cardiac bypass surgery. By 2005, the drug was used in one-third of all open-heart surgeries. In 2007,Trasylol was recalled after several studies linked the drug to kidney damage, kidney failure, and other serious complications.

Why Trasylol Was Used

Trasylol was primarily used during heart surgery. The drug, made by Bayer, worked by inhibiting specific enzymes that made bleeding more likely. Many patients may not have been aware that they were given the drug.

Trasylol was used to…

The Dangers of Trasylol

In January 2006, Trasylol was linked to kidney and heart failure in respected publications including The New England Journal of Medicine and Transfusion. Specific conditions include:

Some patients died from these complications.

How People Protected Their Rights After Being Hurt by Trasylol

Many people who received Trasylol during heart surgery and suffered one of the serious consequences listed above filed lawsuits against Bayer. The lawsuits were part of multidistrict litigation (MDL). In 2010, Bayer agreed to settle the lawsuits for at least $60 million. The settlement provided significant compensation to people who were hurt by this drug or to their survivors.

Since Trayslol was taken off of the market in 2007, lawsuits regarding damages from this drug have been resolved. However, many other dangerous drugs remain on the market, and it is important to be aware of the risks so that you can protect your health and your recovery if you are hurt.