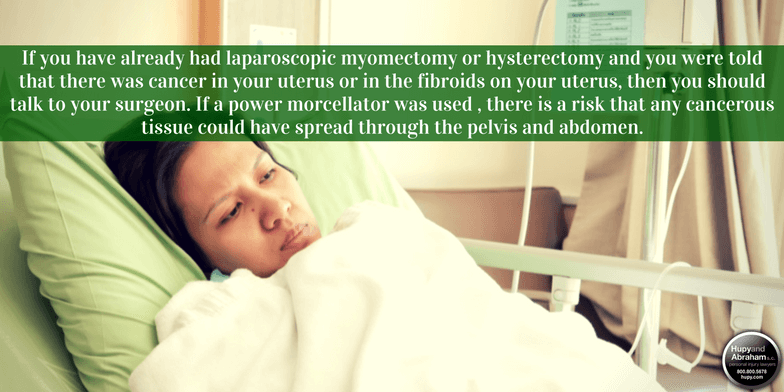 What Are Power Morcellators and What Is the Risk?

Hysterectomies to remove the uterus and myomectomies to remove uterine fibroids are common. The FDA estimates that as many as 1 in 350 women who are undergoing one of these procedures has undetected cancer at the time of the procedure. When a power morcellator is used, it cuts the uterus or the fibroids into smaller pieces while it is still inside the body so that the pieces can be removed through a small incision. Since the tissue is cut while still in the body, there is a risk that any cancerous tissue could spread through the patient’s pelvis and abdomen and significantly impact her chances of survival.

Was The FDA Action Too Little, Too Late?

In December 2015, U.S. Representative Mike Fitzpatrick wrote a letter to the Director of the Office of Criminal Investigations at the FDA asking that the agency look into whether hospitals such as Brigham and Women’s in Boston and the University of Rochester Medical Center in New York and the device manufacturer, Johnson & Johnson, failed to report harm to patients who underwent power morcellator surgeries. Such reports are required by federal regulations.

Representative Fitzpatrick is not the only government official questioning whether the FDA’s patient safety regulations may have failed the public in the decades that power morcellators were used in gynecological surgeries. The House Committee on Energy and Commerce raised similar concerns during a November 2015 hearing. Additionally, the Federal Bureau of Investigation (FBI) is reportedly looking into what Johnson & Johnson knew and when it knew it.

What If You’ve Already Had Surgery or Need Surgery?

If you have already had laparoscopic myomectomy or hysterectomy and you were told that there was cancer in your uterus or in the fibroids on your uterus, then you should talk to your surgeon. If a power morcellator was used in your surgery, then it is important to know now whether the cancer spread.

Finally, if you’ve been hurt by this medical device, then it is important to know more about your rights. Please read our FREE report, Power Morcellators: What You Need to Know About Them, and start a live chat with us now for more information.