Have You Been Hurt by Your Antibiotic Medication? 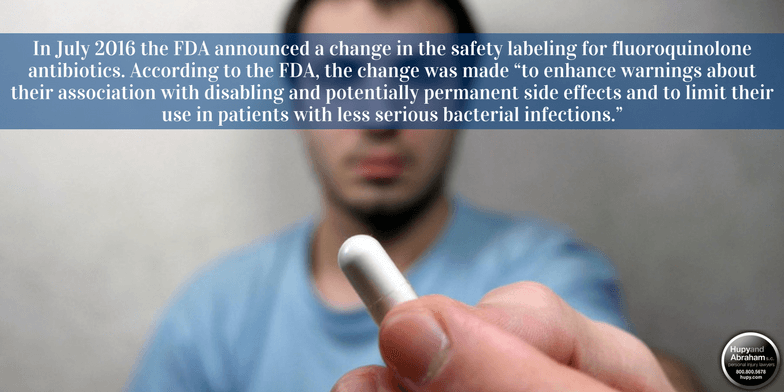 Fluoroquinolone antibiotics have been used to treat many different types of infections for millions of Americans. However, in July 2016 the Food and Drug Administration (FDA) announced a change in the safety labeling for fluoroquinolone antibiotics. According to the FDA, the change was made “to enhance warnings about their association with disabling and potentially permanent side effects and to limit their use in patients with less serious bacterial infections.”

The agency found that the potential of serious harm outweighed the benefit in less significant bacterial infections such as bronchitis, urinary tract infections, and sinusitis. However, the FDA did not pull these medications from the market and continues to approve their use for more serious infections such as plague, anthrax, and pneumonia.

Some of the commonly prescribed fluoroquinolone antibiotics include:

Any of these drugs can result in serious side effects.

The Risk of Taking These Drugs

The side effects caused by fluoroquinolone antibiotics can include permanent and disabling problems affecting:

Other side effects may include:

Permanent disability or death can result from many of these injuries.

What To Do If You’ve Been Hurt

Lawsuits have been filed against the drug manufacturers who designed and produced fluoroquinolone antibiotics. These lawsuits typically allege that the manufacturers made a defective product and that the plaintiffs were hurt or their loved ones were killed as a result. A lawsuit filed in 2016 also alleged that Johnson & Johnson’s Janssen unit intentionally downplayed known side effects.

If you have been hurt by a fluoroquinolone antibiotic, or any other specific medication, then your time to file a lawsuit is limited by the statute of limitations. Accordingly, we encourage you to contact an experienced pharmaceutical class action lawyer today at 1-800-800-5678 to learn more and to set up a free consultation.