Could Your Compulsive Behavior Be Caused by Your Parkinson’s Medication? 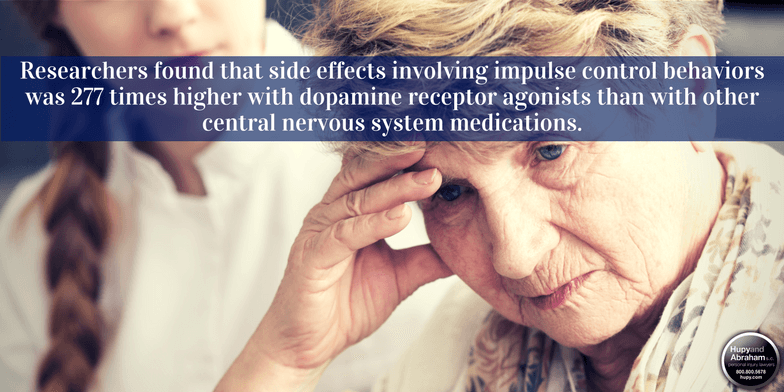 These medications could help you stay mobile and independent longer than you would be able to be without medication. Specifically, they could help reduce stiffness and slowness. However, a study published in JAMA Internal Medicine found that there could be a significant risk of compulsive behavior associated with dopamine receptor agonists.

What Are the Risks?

In June 2016, Public Citizen asked the FDA to add a black box warning to dopamine receptor agonists to warn people of the potential link to compulsive behavior. According to the information submitted to the FDA by Public Citizen, about 17% of public taking dopamine receptor agonists suffer from compulsive behaviors while only 1.6% of the general public suffers from similar behaviors.

What Should You Do If You’ve Been Hurt?

Compulsive behavior hurts. Whether that behavior involves gambling, eating, sex, or other potentially harmful behavior that you cannot stop, your life can be ruined. If your behavior changed after taking Parkinson’s medication and you are concerned that your gambling losses, sexual addiction, or other behavior was caused by your medication, then it is important to discuss your concerns with your doctor and with a pharmaceutical class action lawyer. You may be able to recover for what has happened to you because of a specific drug, but first you need to take action. Please start a live chat with us, or call us directly at 1-800-800-5678, today if you would like more information.