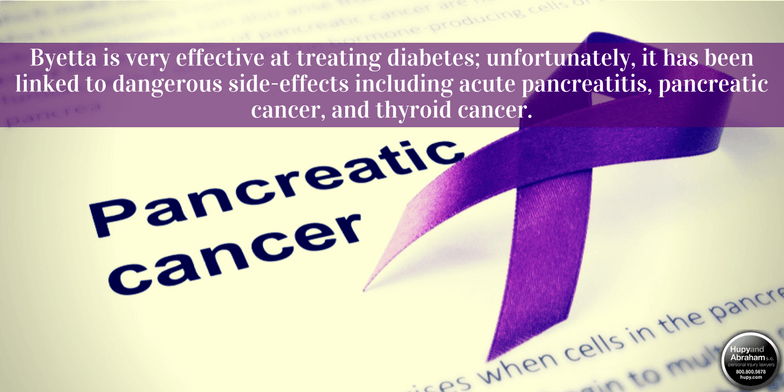 The U.S. Food and Drug Administration (FDA) approved the use of Byetta for the treatment of diabetes in 2005. At that time, most of the known side effects associated with the medication were mild. But soon after the drug came to market, the FDA began receiving reports of more serious side effects.

Byetta is an incretin mimetic. That means it mimics the actions of the hormone glucagon-like peptide-1 (GLP-1), a hormone that regulates insulin and controls appetite. Byetta is very effective at treating diabetes; unfortunately, it has been linked to dangerous side-effects including acute pancreatitis, pancreatic cancer, and thyroid cancer. It is important that anyone taking Byetta be aware of the symptoms of these dangerous conditions and take action to protect their health and their rights.

The symptoms of each cancer can be distinctive:

Pancreatic cancer is one of the most deadly types of cancer with a survival rate of just 8% five years after diagnosis, according to the Pancreatic Cancer Action Network.

By 2006, the FDA had been notified that more than 30 patients taking Byetta had developed a rare condition known as acute pancreatitis or pancreatic necrosis. In April 2013, Dr. Sonal Singh of John Hopkins University published a study in the Journal of the American Medical Association showing that Byetta doubles a patient’s risk of acute pancreatitis.

Initial symptoms of this condition are very general and may include:

As acute pancreatitis progresses, the tissue in the pancreas becomes infected and begins to die. If the infection is not stopped, it can spread to other internal organs. This can cause organ failure and death. The FDA has changed the label on Byetta so it warns about the risk of acute pancreatitis.

Common symptoms of thyroid cancer include:

Thyroid cancer is often treatable and a patient’s prognosis is better when the disease is caught in its early stages.

Some people who have suffered serious injuries, such as those described above, have filed lawsuits against the drug’s manufacturer. If you have been hurt by a specific drug, then please contact us anytime via this website or by phone at 1-800-800-5678 to learn more about your rights and potential recovery.