How Actos Injury Cases Are Being Resolved 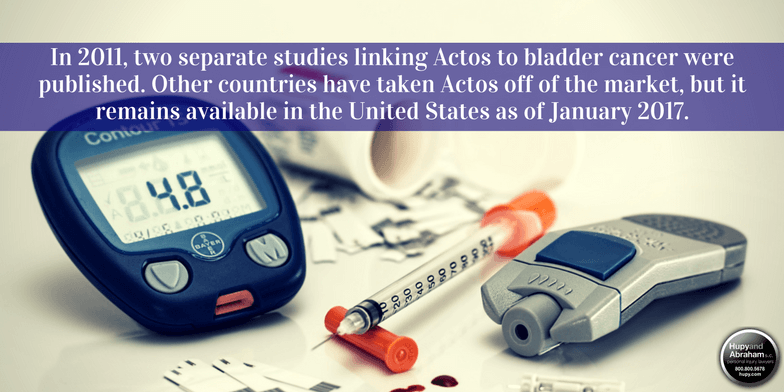 Actos, or pioglitazone, is a medication used to control Type 2 diabetes by increasing the body’s sensitivity to insulin, the hormone that controls blood sugar. It has been approved for use in the United States since 1999. Other countries have taken Actos off of the market, but it remains available in the United States as of January 2017.

In 2011, two separate studies linking Actos to bladder cancer were published in Diabetes Care, the journal of the American Diabetes Association. The first study followed 30,173 diabetes patients in the Kaiser Permanente Northern California diabetes registry. These patients were all age 40 or younger, and had been treated with Actos between 1997 and 2002. The researchers found that patients who were prescribed Actos for two years or longer had an increased risk of bladder cancer compared to patients who took Actos for shorter periods or did not take Actos.

The second study analyzed the 93 reports to the FDA of bladder cancer occurring in people on anti-diabetic drugs. One-third of those cases were linked to Actos.

Both France and Germany suspended the use of Actos after a French study of cancer rates in Actos patients; however, the U.S. Food and Drug Administration believes that the benefits of Actos may outweigh the risks. On June 15, 2011, the FDA issued a “Safety Announcement” warning that patients taking Actos for one year or longer have an increased chance of developing bladder cancer.

Thousands of lawsuits have been filed against Takeda Pharmaceutical Company, the manufacturer of Actos, and Eli Lilly and Company, the marketer of Actos. The companies were accused of failing to adequately warn patients and doctors of a risk that they knew about, or should have known about.

As of 2017, some notable verdicts and settlements have occurred, including:

If you are currently taking Actos or have been prescribed Actos in the past, talk to your doctor about your bladder cancer risk. Additionally, if you have been hurt by a specific prescription drug, then we encourage you to contact our experienced pharmaceutical injury lawyers as soon as possible to learn more about your right and possible recovery.