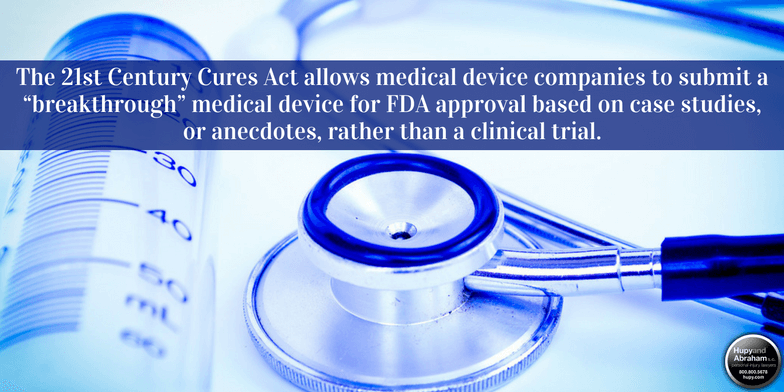 You trust the Federal Drug Administration (FDA) to approve medical devices that are safe. These devices are supposed to help improve your health or reduce your pain. They are not supposed to cause you physical, emotional and financial harm.

But is the FDA doing enough to protect you? Would the 21st Century Cures Act help or hurt you? And what should you do if you’ve been injured by a defective medical device?

Accordingly, some medical devices are found to be dangerous only after patients are hurt.

The Truth About the 21st Century Cures Act

In July 2015, the United States House of Representatives passed a bill called the 21st Century Cures Act. The legislation would allow medical device companies to submit a “breakthrough” medical device for FDA approval based on case studies, or anecdotes, rather than a clinical trial. In other words, the safety evidence needed to get a medical device approved would be lower than it is currently.

The law would also change the approval process for some drugs—particularly for antibiotics and antifungal medications—and it would allegedly allow these drugs to be approved with less scrutiny than currently exists.

Medical device companies have a duty to manufacture safe products and to warn patients and their doctors of any side effects or risks. If you have been hurt by a medical device, then we encourage you to start a free live chat with us now. Let’s schedule a meeting to discuss your rights and your potential recovery.