Is It Safe to Take Antidepressants During Pregnancy? 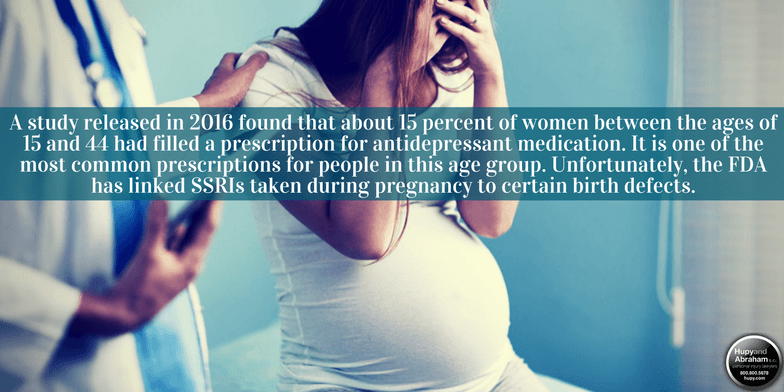 It can be very difficult to manage depression during pregnancy, but it is important that you do so. Unfortunately, some medications that you may have taken prior to becoming pregnant may no longer be safe. Accordingly, it is important to recognize the risks posed by selective serotonin reuptake inhibitors (SSRIs) and to know what you can do to protect yourself and your child if either of you have been hurt by a medication during pregnancy.

What Is an SSRI?

SSRIs are popular forms of antidepressant medications. They work by increasing the levels of serotonin in the brain. Some of the prescriptions written for SSRIs include Prozac, Zoloft, and Paxil.

A study released in 2016 found that about 15 percent of women between the ages of 15 and 44 had filled a prescription for antidepressant medication. It is one of the most common prescriptions for people in this age group.

What Potential Problems Come From Taking SSRIs During Pregnancy?

The federal Food and Drug Administration (FDA) and independent studies have linked SSRIs taken during pregnancy to the following birth defects:

What Should You Do If You or Your Baby Has Been Hurt?

The public has not always known the information provided above. If you are one of the women who experienced an SSRI side effect during pregnancy, or if your child was injured, then it is important to protect your rights. Please call our pharmaceutical class action lawyers today to discuss your SSRI drug injury and possible recovery. Our experienced attorneys can be reached via this website or by phone at 1-800-800-5678 at any time.