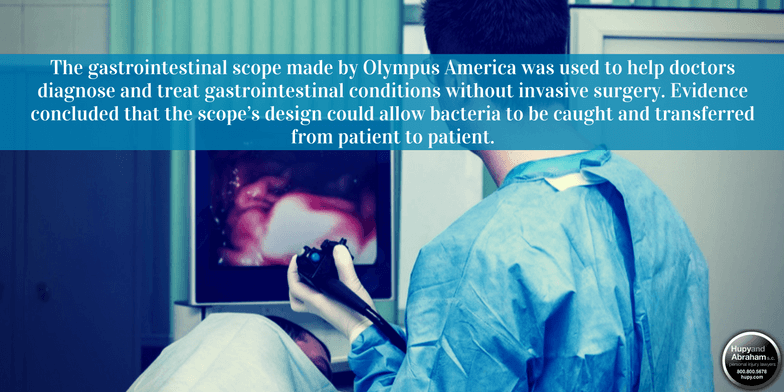 Since 2013, at least 35 people have died, at least 24 people have become sick, and an unknown number of people have been infected because of an allegedly defective medical device made by Olympus America. Infections occurred at hospitals across the country—including here in Milwaukee.

The medical device is a gastrointestinal scope. The scope can be put down the throat of patients to help doctors diagnose and treat gastrointestinal conditions—including gallstones and some cancers—without invasive surgery. It is alleged that bacteria can get into parts of the scope that are supposed to be sealed and then the bacteria can be spread when the scope is used on subsequent patients.

What Did Olympus Know and When?

In 2012, 22 patients become sick at a Dutch hospital. An Olympus investigator reportedly looked into the outbreak and concluded that the scope’s design could allow bacteria to be caught and transferred from patient to patient. It was suggested in that report that Olympus conduct a worldwide investigation into the problem. European hospitals were warned about potential contamination, but United States hospitals did not receive a similar warning.

After that report, Olympus continued to sell its scope in the United States where infections allegedly sickened and killed patients in U.S. hospitals. After each injury or death, Olympus reportedly contended that the hospital failed to clean the scope appropriately and did not admit nor warn of any potential design defect.

In 2013, 18 people reportedly died from infections in a Seattle hospital after having tests or procedures conducted with the Olympus scope. The hospital maintains that they contacted Olympus, that Olympus officials came to the hospital and observed how hospital employees cleaned the scopes, and that several scopes were returned to Olympus for evaluation. The hospital reports that Olympus never told them of the issues at other hospitals. Olympus, however, reportedly told the Food and Drug Administration (FDA) that it offered an onsite visit but the hospital declined and that it never received scopes for evaluation from the hospital. A government investigation into the incidents found that the hospital followed correct cleaning procedures and that the cleaning instructions provided by Olympus were insufficient. The hospital is now reportedly suing Olympus for fraud, alleging that the company “deceptively concealed…the risks and flaws of the scopes,” according to the Los Angeles Times.

In February 2015, the Los Angeles Times reported that that three people had died from infections in an L.A. hospital. The following day the FDA warned U.S. hospitals that infections could be related to the scope. Soon after, congressional investigators and United States prosecutors began looking into how Olympus responded to infection outbreaks.

In May 2015, the FDA convened a panel of medical experts to discuss the issue of Olympus scope infections.

What Should You Do If You’ve Been Hurt or Your Loved One Has Died?

Some families who have lost loved ones due to alleged Olympus scope infections have filed lawsuits against Olympus. If you have been hurt or if you have lost a loved one because of such an infection, then you deserve to have all of the information that you need to make an informed decision about whether to pursue legal action because of this medical device injury. Please fill out our online contact form today to learn more.