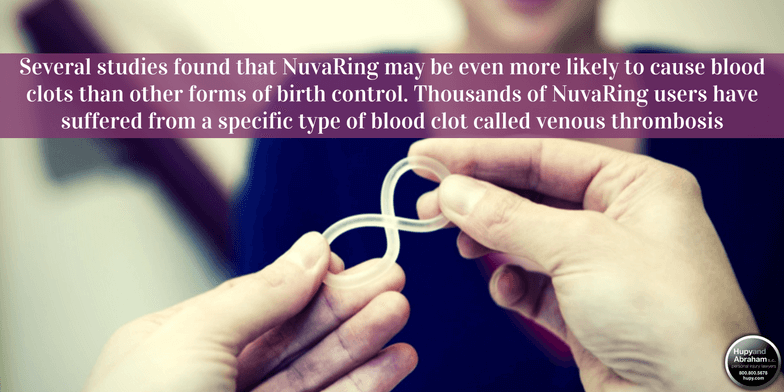 The NuvaRing was supposed to revolutionize birth control.

NuvaRing is a flexible plastic ring that releases a dose of synthetic hormones. It is placed near the cervix. After three weeks, the vaginal ring is removed, and a new ring is inserted a week later.

Many women were told that NuvaRing was a safer alternative to traditional birth control pills. Oral contraceptives have been linked to dangerous blood clots and increase a woman’s risk of heart attack and stroke.

But Is NuvaRing Safe?

Several studies found that NuvaRing may be even more likely to cause blood clots than other forms of birth control. Thousands of NuvaRing users have suffered from a specific type of blood clot called venous thrombosis (VTE).

What Did Merck Do About This?

In October 2013, Merck updated the package label to warn that women should stop using NuvaRing if a blood clot forms.

On February 7, 2014, Merck announced that the company would pay $100 million to women who say they were harmed by using the NuvaRing. But the company also said, “We stand behind the research that supported the approval of NuvaRing, and our continued work to monitor the safety of the medicine.”

If you have been hurt by a medical device, then it is important to know your rights before a class action settlement is reached. Please reach out to our experienced attorneys via this website to learn more.