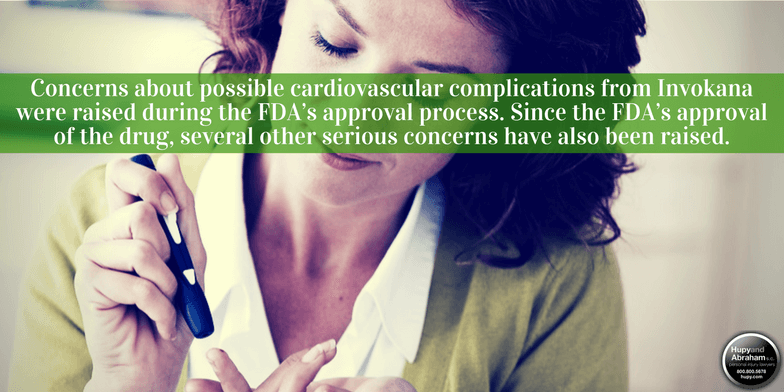 In March 2013, the U.S. Food and Drug Administration (FDA) approved a new kind of medication to treat type 2 diabetes. Invokana debuted as the first in a new class of diabetes medications known as sodium-glucose co-transporter 2 inhibitors (SGLT2 inhibitors).

Invokana brought hope to many of the 24 million Americans living with type 2 diabetes, but at what cost?

Concerns about possible cardiovascular complications from Invokana were raised during the Food and Drug Administration’s (FDA’s) approval process. The drug was approved by a vote of ten to five; however, future studies about cardiovascular safety were required. More specifically, the FDA required the following studies to be completed:

Since the FDA’s approval of the drug, other concerns have also been raised.

In May 2015, the FDA warned that people who take Invokana may be at an increased risk of suffering from ketoacidosis, even though ketoacidosis is more commonly a threat to people with type 1 diabetes rather than people with type 2 diabetes. Ketoacidosis occurs when the body makes too many ketones, changing the patient’s metabolism. It is a serious medical condition that makes the blood too acidic and that can result in coma or death.

In September 2015, the FDA issued another Invokana safety announcement. This time the agency warned that the drug could result in an increased risk of bone fractures and a decrease in bone density.

In December 2016, Invokana lawsuits were centralized in multi-district litigation (MDL). The plaintiffs in these cases claim that they suffered significant injuries, including kidney damage and ketoacidosis. They further allege that Johnson & Johnson failed to adequately test Invokana before putting it on the market and that the company failed to adequately warn patients of the risks.

Additional Invokana lawsuits may be filed. If you have been hurt or if your loved one has been killed by this or any other specific drug, then it is important to find out more about your legal rights and your possible recovery. Please start a live chat with us today to learn more about what you can do next.