Could You Be Hurt by a Robot During Surgery? 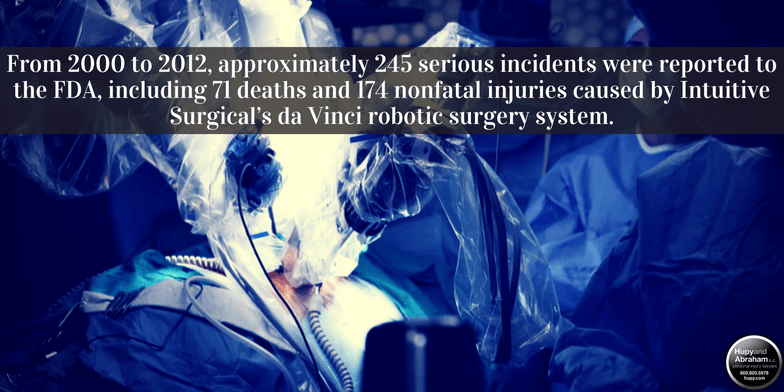 Should you trust your life to a robot? Many hospitals think you should. They heavily advertise robotic surgery as being more precise, causing less pain, leaving fewer scars, and enabling a faster recovery and quicker return to normal activity.

Performing robotic surgery is somewhat like playing a video game. The surgeon sits at a console that provides a three-dimensional view of the patient’s body. He uses a joystick-like control system to control a patient-side robotic cart with four surgical arms. Three of the arms manipulate surgical instruments, while the fourth holds a camera. The arms carry out the surgeon’s commands and show the surgeon what is happening inside the body. This allows the surgeon to make very precise cuts on a very small scale, which potentially means less blood loss, less scarring, and a quicker recovery.

The U.S. Food and Drug Administration (FDA) has received thousands of adverse event reports associated with robotic surgical devices including Intuitive Surgical’s da Vinci robotic system. From 2000 to 2012, approximately 245 serious incidents were reported to the FDA, including 71 deaths and 174 nonfatal injuries. Some of the specific injuries have included:

When a medical device malfunctions, hospitals are required to report the incident to the manufacturer. The manufacturer, in turn, must report the incident to the FDA. But researchers at Johns Hopkins University have found that the FDA is not receiving reports of da Vinci surgical injuries in a timely manner. The researchers looked through news reports and court records for mention of injuries and deaths linked to the da Vinci surgical system. They found eight deaths that were not properly reported to the FDA. Dr. Martin Makary, the co-author of the study, believes this is just the tip of the iceberg, “We think that based on the sample, the 245 reported cases represent a small fraction of the true events out there.” The study was published in The Journal for Healthcare Quality.

Additionally, in 2016 two insurance companies filed a lawsuit alleging that Intuitive Surgical failed to report more than 700 injury claims related to the da Vinci system when the company applied for insurance coverage.

Intuitive says that robotic surgery has helped millions. According to the company, any surgery is risky and the reports to the FDA do not mean that surgical robots are dangerous. But the victims of da Vinci robotic surgery injuries disagree. The medical device company is currently facing about 86 lawsuits filed by injured patients.

Don’t Suffer Another Minute Without Knowing Your Rights

If you are one of the patients who has suffered an injury from a da Vinci surgical robot, then you need to know your rights. Your injury may have had nothing to do with your physician. Your surgeon may have done everything right during surgery, but the da Vinci surgical system that your surgeon was using may have been defective and it may be that defect that has caused your serious injury.

You do not have to accept the consequences of your injury as a cost of surgery. Instead, if Intuitive Surgical—the company that designs and builds these robots—was negligent, then you may have the right to recover damages in a pharmaceutical class action lawsuit.

Hupy and Abraham is representing victims of robotic surgery injury in Wisconsin, Iowa, and Illinois. If you or someone you love was injured during surgery with the da Vinci surgical robot, you may be eligible for compensation for your medical bills, pain and suffering, and more. Call 800-800-5678 to learn more about da Vinci surgical robot lawsuits and your potential recovery from your medical device injury.