Could a Bair Hugger™ Have Caused Your Infection After Orthopedic Surgery? 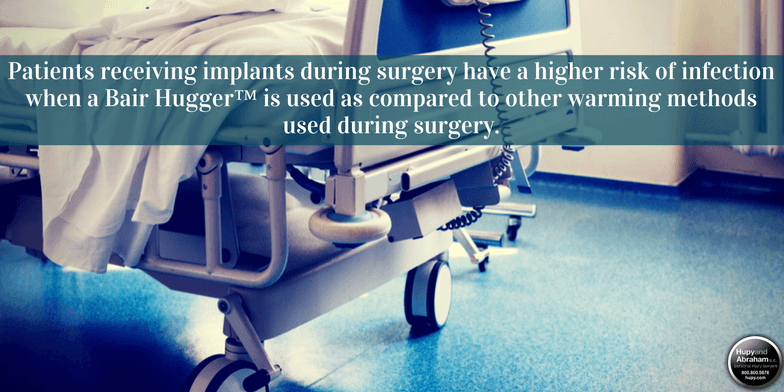 There are many benefits to helping patients maintain their body temperatures during surgery, but is there also a risk?

Why Maintaining Body Temperature Is Important During Surgery

Patients who do not have their temperatures maintained during surgery are at significant risk of developing hypothermia. This can lead to complications including blood loss and infection. To prevent these complications, hospitals often use medical devices to keep patients warm during surgery. One of these medical devices is known as the Bair Hugger™. The Bair Hugger™ gained Federal Drug Administration (FDA) approval in the 1980s and is used in more than 80 percent of U.S. hospitals.

But Is Bair Hugger™ Always the Answer?

As of December 2016, the FDA has not issued a recall of Bair Hugger™ devices. However, lawsuits have been filed alleging serious infections during orthopedic and implant surgeries. These cases have been consolidated in multidistrict litigation (MDL). In November 2016, the judge assigned to the case issued an order explaining how the first Bair Hugger™ bellwether cases would be chosen for trial. The bellwether selection is expected to be completed in March 2017.

Did a Bair Hugger™ Cause Your Infection?

Bair Huggers™ are not the only causes of infection during orthopedic or implant surgeries. However, if you suffered an infection during such a surgery then it is important to find out more about why you were hurt. You will want to know if:

An experienced pharmaceutical injury lawyer can help you get these answers and, if appropriate, help you get the compensation that you deserve after a medical device injury.