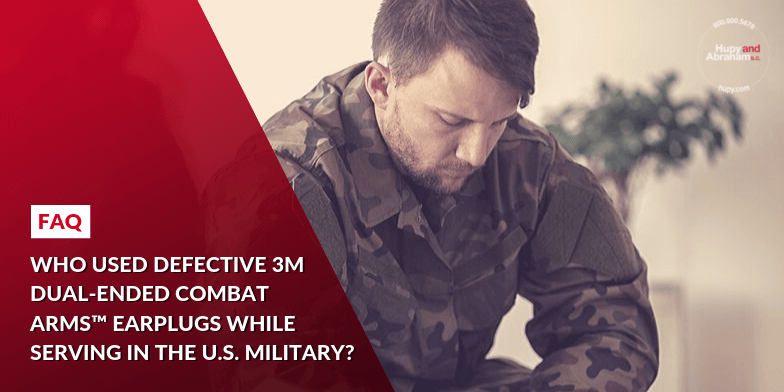 3M Dual-ended Combat Arms™ earplugs were standard issue hearing protection for many United States service members from 2003 – 2016. Thousands of service members in the Army, Air Force, Marines, and Navy may have used these earplugs without knowing that they were defective and that they could fail to protect them from hearing loss and tinnitus.

3M Dual-ended Combat Arms™ earplugs were routinely provided to service members around the world. During the 2000s and early 2010s, the United States had many military personnel serving in Iraq and Afghanistan who received these earplugs to protect them from loud noise exposure.

These load noises could cause significant hearing damage, including:

Have You Been Hurt by a Defective 3M Earplug?

If you suffer from hearing impairment, then you may be entitled to veterans’ disability benefits, but these benefits may not fully compensate you for all of your expenses, losses, and damages. To fully recover for all of your past and future medical costs, lost income, out-of-pocket expenses, physical pain, and emotional suffering, you may need to pursue a case against 3M.

Our experienced personal injury lawyers are here to help you get the recovery that you deserve. We will go above and beyond to make sure that you are treated fairly. Call us, or fill out our online contact form, to schedule a free, no-obligation consultation and to make sure that all of your rights are protected.