I think I was partly to blame for my dog bite injury. Can I still recover damages? 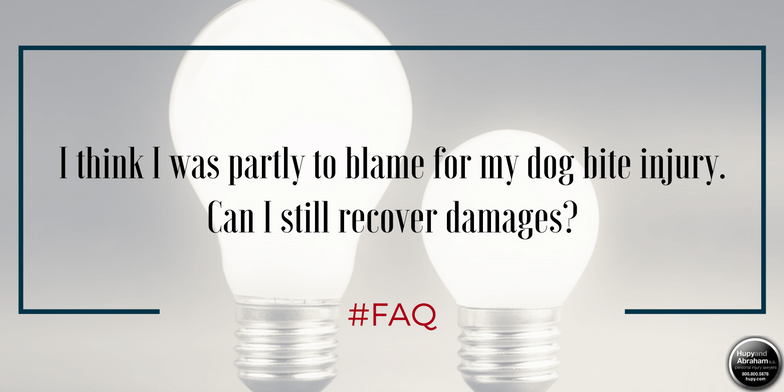 If you think that you were partly to blame for your dog bite injuries, then you can expect that the dog owner, his insurer, or his attorney is going to think the same thing and try to prevent you from recovering damages for your injuries.

Can They Do That?

According to the Iowa dog bite statute, the owner of a dog is not liable for damages if the person who was hurt by the dog was doing an unlawful act that directly contributed to his own injury. (See Iowa Code Chapter 351, Section 28).

If the dog owner, his insurer, or his attorney can prove to the insurance company or the court that you were more than 50% responsible for the dog biting or otherwise hurting you, then you will not be able to recover damages.

However, if you were partly at fault—but not primarily at fault—for your injuries, then Iowa law allows you to recover damages. Your damages will be reduced by the percentage of fault attributable to you. For example, the jury could find that you trespassed on the dog owner’s property and the jury could decide that because of your trespassing you were 25% responsible for being bitten by the dog. In this scenario, your damages would be reduced by 25% because it would be unfair to hold the dog owner accountable for your wrongdoing. The dog owner, or his insurer, would still be responsible for paying 75% of your damages.

Does This Sound Complicated?

It is complicated. There is no magic formula that determines the percentage of fault. Instead, how fault is attributed during settlement negotiations or in court is going to depend on two things: the quality of evidence that is provided, and the persuasiveness of the arguments that are made.

Thus, it is important to be prepared and to work with an experienced dog bite lawyer to get the fair recovery that you deserve. To learn more about how a dog bite case works, or to get your specific questions answered, please start a live chat with us now or call us directly at 1-800-800-5678 to schedule a free consultation.