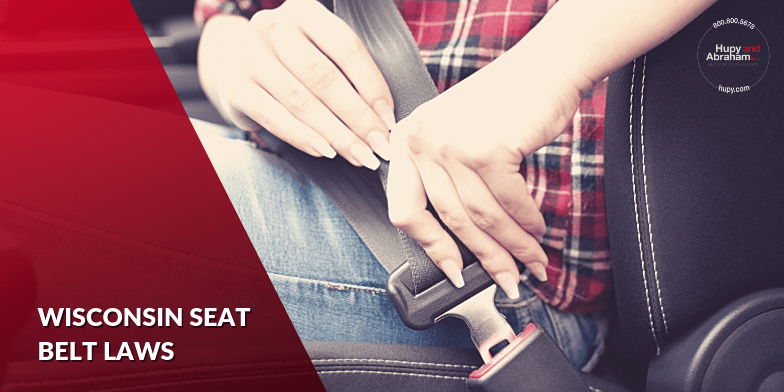 Wisconsin law requires that drivers and most passengers wear safety belts. Young children under the age of four are exempt from Wisconsin’s seat belt law and must instead be restrained according to Wisconsin’s car seat law.

There are exceptions to the general requirement to wear a seat belt. For example, seat belt use is not always required in authorized emergency vehicles, if a vehicle makes ten stops or more per mile that require the driver to exit the vehicle, or if a physical or mental condition prevents a person from being restrained by a seat belt.

Wisconsin has a primary enforcement seatbelt law. This means that a police officer may pull over and ticket a driver for failing to wear a seat belt even if no other law is being violated. In most cases, the penalty for violating the seat belt law is $10 and no points on a driver’s license. The penalty increases to $30-$75 if there is a child under the age of four who is unrestrained and to $10-$25 if there is a child between the ages of four and eight who is unrestrained.

Despite these laws, the Wisconsin Department of Transportation reports that seat belt use in Wisconsin is both below the national average and below the use reported in neighboring states. According to the state, about 88% of Wisconsin drivers and passengers use seat belts compared to 89% nationally and 90% or more in states that border Wisconsin.

It is important to remember that Wisconsin’s seat belt laws apply to anyone driving on a Wisconsin road and not just residents of the state. If you are traveling from Illinois, Iowa, or another state, you are expected to know about and to comply with Wisconsin law.

What the Research Shows About Seat Belt Safety

According to the Centers for Disease Control and Prevention (CDC), seat belts reduce accident-related fatalities and injuries by about half. While airbags and other safety features may be useful in preventing serious injuries and fatalities, they are not as effective as seat belts and should not be used alone.

Seat belts prevent drivers and passengers from being thrown around or out of the car. This can prevent not only death but also brain injuries, spinal cord injuries, internal injuries, broken bones, and other injuries.

If you were not wearing your seat belt at the time of your car accident, then the insurance adjuster will likely try to argue that you should be financially responsible for your own injuries. However, while your injuries may be worse because you failed to wear a seat belt, the accident would have happened even if you had been wearing a seat belt. In other words, your failure to wear a seat belt did not cause the crash.

It is up to the other driver, or that driver’s insurance company, to prove that you were not wearing a seat belt. If this can be done, then your settlement may be reduced, but it will likely still be significant enough to pursue.

To learn more about your rights to a full and fair recovery following a Wisconsin car accident, please contact an experienced Wisconsin car accident lawyer as soon as possible. Insurance companies know that we mean business and that we will work tirelessly to get our clients the fair recoveries that they deserve. Often, this makes them more willing to reach a fair settlement with us. If that is not possible, then we will represent you in court.