Your Guide to DePuy Hip Implant Injuries and Recoveries 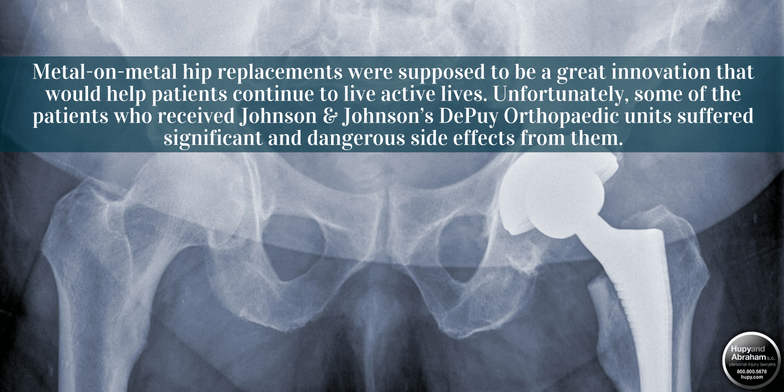 Metal-on-metal hip replacements were supposed to be a great innovation that would help patients continue to live active lives. Johnson & Johnson’s DePuy Orthopaedic unit has made some metal-on-metal hip replacements including the Pinnacle and the ASR lines. Unfortunately, some of the patients who received these types of hip implants suffered significant and dangerous side effects from them.

The Dangers of DePuy Metal-on-Metal Hips

Some of the complications reported from DePuy metal-on-metal hip replacements include:

Metallosis is a serious medical condition that results when metallic debris builds up in the body’s tissues. Before 2010, very few people had heard of metallosis. In 2010, the condition became better known when a study linked metallosis to DePuy ASR hip implants.

The metal-on-metal ASR hip implants are designed in a way that causes the metal components to rub against each other during daily use. This causes the metal to break down, releasing metal ions into the bloodstream and the surrounding tissues. The body’s immune system recognizes the metal particles as foreign. It tries to fight them off, but the immune system is designed to fight germs—not metal. The immune response causes inflammation in the tissues around the metal. The patient feels severe pain and has difficulty moving the joint.

Other symptoms of metallosis include:

Additionally, metallosis has been linked to cancer.

A little bit of cobalt is a good thing. Cobalt is a component of vitamin B-12, an essential nutrient that is involved in the formation of blood cells. However, too much cobalt can be dangerous.

Symptoms of metal poisoning include:

If the metal-on-metal hip replacement begins to break down, then a patient may suffer:

Any of these symptoms is reason to see a doctor.

How These Cases Have Been Resolved

In November 2013, Johnson & Johns agreed to pay approximately 8,000 patients a total of $2.475 billion in compensation and to cover all costs related to revision surgery. These were patients who were hurt after receiving DePuy ASR hip implants.

Three years late, in November 2016, a Texas jury returned a $1.04 billion verdict in favor of six plaintiffs who were hurt by Johnson & Johnson’s DePuy Orthopaedics, Inc. unit Pinnacle hip implants. The jury found that DePuy negligently designed their metal-on-metal Pinnacle hip implants and failed to warn patients of the potential dangers. These were bellwether cases for the Pinnacle hip implant injury cases and further trials or settlements are expected.

Some Cases Are Still Going On

Some people who were hurt by DePuy metal-on-metal hips are still seeking compensation in court. An experienced medical device attorney can help an injured victim fight for fair compensation including damages for:

If you have any questions about your own ability to recover damages after this type of medical device injury, then please contact us today at 1-800-800-5678 to learn more.