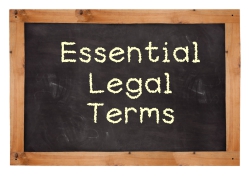 If you’ve suffered a personal injury and you are pursuing a legal claim for damages then you will likely hear many legal terms during the course of your case. It is important to understand what these terms mean so that you can make informed decisions about protecting your legal rights and recovery.

If you have any question about how these terms—or any other terms—apply to your specific case, then you should not hesitate to ask your attorney for clarification.