2015 Car Accident Fatalities Up Sharply in Iowa and Across the U.S. 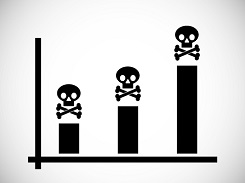 What We Know So Far About Iowa Accident Deaths in 2015

The Iowa Department of Transportation defines a crash-related death as one that occurs within 30 days of an accident. Thus, the information provided so far is preliminary. However, the information that we do have indicates that:

A thorough analysis of the accident causes has not yet been reported.

But This Trend Is Happening Throughout the Country

Information from the National Highway Traffic Safety Administration (NHTSA) and the National Safety Council (NSC) indicates that there have been more deaths on United States roads this year than in any year since 2007.

Generally, the causes of these accidents are the same as the causes of many fatal car accidents. Things like speeding, drunk driving, and distracted driving result in fatalities, for example. However, in 2015 lower gas prices and a better economy could mean that there are more cars on the road and, thus, more accidents.

We encourage everyone to be safe in the coming months and hope that fewer families have to endure the grief of a tragic wrongful death from an Iowa car crash in the future.