Is there a difference between vaping and JUULing? 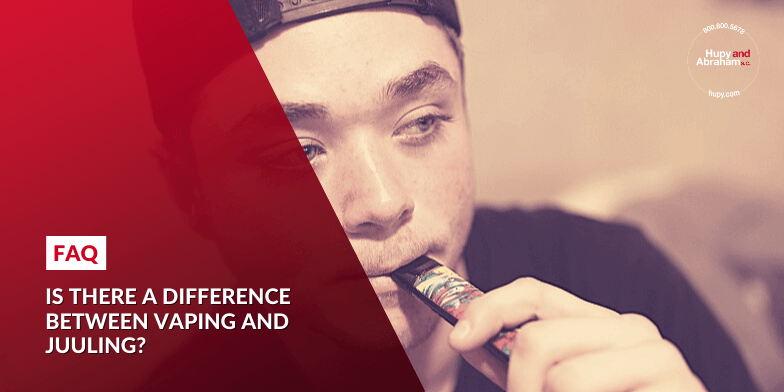 Times have changed since we were young. While traditional cigarettes are still available, they are not the first nicotine choice for many of today’s teens and tweens. Instead, parents need to be aware of new dangers like vaping, JUULing, and e-cigarettes.

Aren’t Vaping and JUULing the Same?

Vaping is the act of smoking an e-cigarette (or “e-cig”). E-cigs are battery-operated devices that allow you to inhale aerosols containing things like nicotine, chemicals, and flavoring. The battery heats the e-cigarette liquids into vapors. That’s why the term for using e-cigarettes is often referred to as vaping.

If you learn that your child is vaping or if your child has any unusual medical symptoms, then you should reach out to your child’s doctor as soon as possible.

Talk to Your Child About Vaping and JUULing Today

Our JUUL injury lawyers know that you have difficult conversations ahead of you. Many parents don’t want to think about their young children and teens smoking e-cigarettes. However, vaping and JUULing is common among middle and high school students, and the health consequences are often significant. It is better to have uncomfortable conversations now than it is to have horrific conversations next to your child’s hospital bed.

If you need more information about JUULing or what to do if a JUUL product hurts your child, then we encourage you to read our FREE guide, JUUL: What You Need to Know About It, before speaking with your child.

I've never sued anyone before. What should I expect if I sue JUUL?
How will I pay for my child's future medical costs if my child suffers a JUULing-related illness?
How can I stay up to date on JUUL multidistrict litigation?
Is there a difference between vaping and JUULing?
Where could I have been exposed to Roundup® in Iowa?
What can I do right now to help my child who is vaping?
I qualify for Veterans' disability benefits because of my hearing loss. Do I still need a lawyer?
Win or it is Free Guarantee