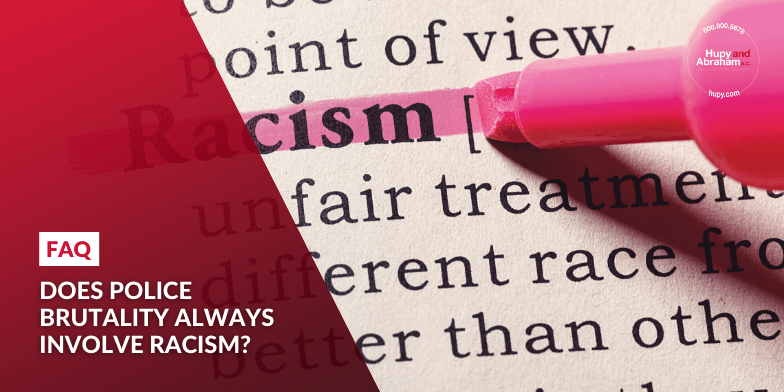 Police brutality occurs whenever a law enforcement official uses more force than necessary given the situation and causes physical harm to someone. Excessive force may occur regardless of a suspect’s race, and all police brutality victims have the right to pursue legal recoveries for their injuries.

Police Brutality and Racism in the United States

The United States has a long and sad history of racism. The connection between police violence and racism was evident from our country’s founding through current times when people such as George Floyd and Breonna Taylor became victims of police violence.

Studies have found that police officers are more often violent when a suspect is black. One study suggests that the best evidence of how structural racism may impact police brutality occurs in three states: Wisconsin, Illinois, and Minnesota. These states register high rates of racism and have some of the highest rates of police shootings of unarmed African-American suspects.

Anyone—of any race—may have a police brutality claim. If you were hurt by a police officer’s unnecessary violence, strip search, use of a taser, gunshot, restraint, false arrest, sexual assault, or other conduct that was excessive given the circumstances, then we encourage you to contact our experienced police brutality lawyers today for a free consultation about your rights.

We will thoroughly investigate what happened to you and fight hard to hold the police accountable for any wrongdoing that resulted in your injury or a loved one’s death. We’ve secured the largest police brutality settlement in Wisconsin history, and police departments know that our dedicated legal team will fight hard for all of our clients. Call us or begin a live chat with us now to learn more.