Do I need an injury lawyer if I lost my hearing while serving in the United States military? 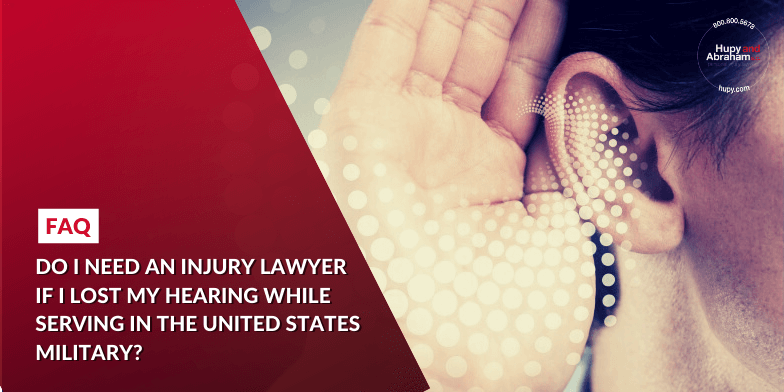 The answer is maybe. Hearing loss and tinnitus are common injuries for United States Veterans. In many cases, Veterans are eligible for Veterans disability benefits if they have a hearing-related injury. However, not every Veteran who suffers from hearing loss or tinnitus has a personal injury case.

Our injury lawyers will review your hearing-related injury case if you served in the U.S. military between 2003 – 2015, and you were issued dual-ended Combat Arms™ Earplugs Version 2 for hearing protection.

From 2003 to 2015, United States service members were routinely provided with dual-ended Combat Arms™ Earplugs Version 2 as part of their standard-issue equipment. The earplugs were first made by Aearo Technologies and later by 3M. The earplugs, which were meant to protect servicemembers from tinnitus and hearing loss, proved to be too short to provide the necessary protection from loud noises. As a result, some servicemembers’ ears were not protected from loud noises and they suffered permanent injuries.

3M settled a False Claims Act with the U.S. Department of Justice after the United States alleged that the company knew about the design defect and failed to disclose it to the military.

How an Illinois Injury Lawyer Can Help You

The problems with dual-ended Combat Arms™ Earplugs Version 2 are well documented. However, you can’t rely on the news stories or even the Department of Justice’s settlement to make a fair recovery for your injuries. Instead, 3M will likely argue its earplugs did not cause your hearing loss or tinnitus.

You will need convincing evidence and persuasive arguments to prove that 3M’s product caused your hearing-related injury. Our experienced Illinois injury lawyers are honored to fight on behalf of the men and women who so bravely served our country. We will make sure that all of your legal rights are protected and aggressively pursue the compensation that you deserve.

Don’t worry about the cost of hiring a 3M earplug injury lawyer. Call us today to schedule a free consultation and to learn about our Win or It’s Free Guarantee.