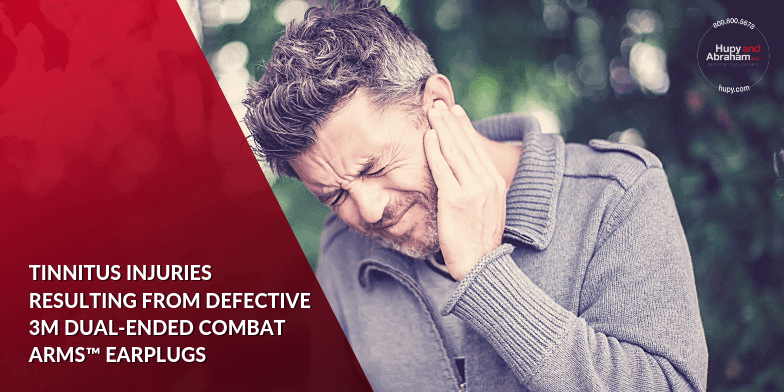 Military personnel are regularly exposed to extremely loud and dangerous noises, which can result in permanent injuries such as tinnitus and hearing loss. According to the United States Department of Veterans Affairs, tinnitus is the most common disability among U.S. Veterans.

Often, tinnitus can be prevented with proper hearing protection. Unfortunately, many service members who thought they were using earplugs to prevent injury were provided with defective earplugs that did not work as expected.

Technically, tinnitus is not an independent medical condition, but rather the symptom of an ear injury or other condition. Tinnitus is often the term used to describe hearing certain sounds that are not really being made. According to the Mayo Clinic, a person with tinnitus may hear phantom:

The noise may be present some of the time or all of the time, and it could be loud enough to interfere with a person’s daily activities. Additionally, people with tinnitus can suffer from fatigue, anxiety, depression, memory problems, and other side effects.

A doctor may diagnose tinnitus after listening to your symptoms, performing a physical exam, performing a hearing test, and reviewing CT or MRI scans.

Tinnitus treatment depends on its underlying cause. If your ear injury cannot be treated, then your doctor may suggest noise suppression devices and medications to try to lessen the effects of tinnitus.

In 2018, the Department of Justice settled the case with 3M for $9.1 million. 3M did not admit any wrongdoing as part of the settlement, and the settlement money was not intended to compensate the service members injured by the defective Dual-ended Combat Arms™ earplugs.

Take Action If Have Tinnitus From Defective 3M Earplugs

3M had a responsibility to provide the government—and you—with safe earplugs. If you suffer from tinnitus after using government-issued Dual-ended Combat Arms™ earplugs, then you could have a claim against 3M, not the United States government.

Pursuing legal action against 3M could result in more compensation than you can get from a Veteran’s disability claim and it could send a strong message to any company that makes protective gear for the United States military. Design defects and failure to warn about potential flaws will not be tolerated.

A lawsuit won’t cure your condition, but it could provide you with fair damages for the medical costs, lost income, out-of-pocket costs, physical pain, and emotional suffering that you experience because of 3M’s negligence.

We want you to have all of the facts before you decide whether to file a lawsuit. Call Hupy and Abraham today to schedule a free, no-obligation consultation about your rights and possible recovery. We will not pressure you to file a lawsuit, but we will provide you with all of the information that you need to make an informed decision about what to do next, and we will fight hard for your fair recovery if you decide to move forward. Call us or start a live chat with us now to learn more.