Important Statistics About the Drop in U.S. Motorcycle Theft 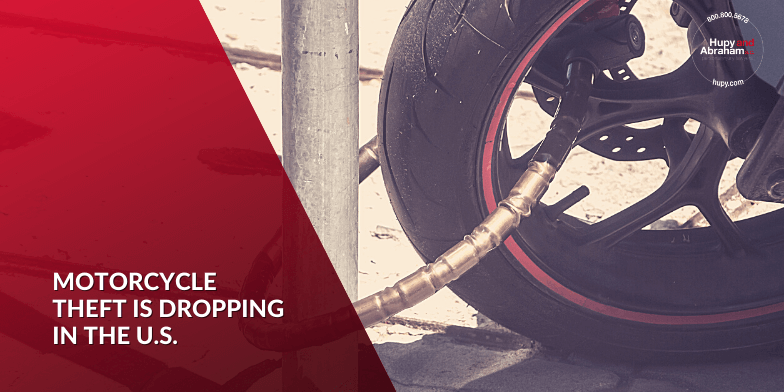 Good news for motorcyclists everywhere! Motorcycle theft is on a decline in the United States. According to a recent report by the National Insurance Claim Bureau (NICB), motorcycle theft has been down 12% between 2016 and 2019. While it may not seem it considering 40,380 motorcycles were reported stolen in 2019, this is actually an all-time low for motorcycle theft. In addition, law enforcement bodies have seen better luck in catching thieves, or at the very least tracking down stolen bikes, as nearly half (18,857) of bikes stolen in 2019 were returned to their original owners.

This should by no means suggest that riders should let their guard down. As we have highlighted before, there are many ways that you can deter the theft of your motorcycle and we highly encourage all riders to follow the guidelines. Always assume that your motorcycle is a target for a local thief and take the necessary precautions to ensure that it does not fall into the wrong hands.

The report comes with some interesting statistics about how likely certain motorcycle brands are to be stolen. For example, Honda was the most stolen brand of 2019 with 8,122 bikes reported stolen. Yamaha motorcycles were the second most likely to be stolen with 6,495 stolen units and Harley-Davidson took the third place spot with 4,737 motorcycles stolen. Suzuki and Kawasaki rounded out the top five most stolen brands with 4,686 and 4,641 stolen units, respectively.

According to the same report by the NICB, the following states pose the greatest threat of theft to motorcyclists:

Additionally, motorcycle theft was highest in August (4,642) and lowest in February (1,972), which coincides with a weather-influence pattern that was also present in previous years of the study. It makes sense that theft would be highest in warm months when more people are taking their motorcycles out for rides. As such, riders are encouraged to take extra care in locking up or concealing their motorcycle when they are not actively using it.

While theft is still unfortunately a very real and present factor in the world of motorcycling, it certainly is very reassuring to see that it is significantly decreasing in the United States. We encourage all riders to do their part and ensure that this number continues to decrease in the coming years.

For more relevant news and articles for motorcycle enthusiasts, be sure to keep up to date with the Current News for Riders page on hupy.com.