Have You Been in a Crash With an Aggressive Driver? 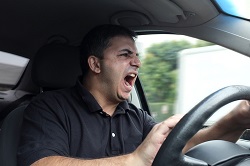 Aggressive drivers aren’t just rude—they are dangerous. An aggressive driver may be impatient, angry, or simply disregard the welfare of others. Regardless of the reason the driver is aggressive, the danger is the same. The actions of an aggressive driver put other motorists at risk for serious road rage accident injuries or, worse, fatalities.

Who Is an Aggressive Driver?

An aggressive driver is one who creates a danger on the road by:

There are several theories about what causes aggressive driving or road rage. Those theories include:

The AAA Foundation for Traffic Safety reports that up to 56 percent of fatal crashes may be triggered by aggressive driving.

An experienced lawyer can help you get the fair recovery that you deserve if you have been injured or if your loved one has been killed because another driver was aggressive on the road. To find out more, please fill out our online contact from today to schedule a free consultation with us.

What to Do If a Drunk Driver Hurts You in Wisconsin
What Every Wisconsin Driver Should Know About Deer Accidents
Which Age Group Has the Most Traffic Accidents and Fatalities?
Milwaukee's Fight to End Reckless Driving Continues
Car Crash Airbag Injuries
What Milwaukee Is Doing to Prevent Reckless Driving Accidents
How to Deal With an Insurance Adjuster After a Car Accident
Win or it is Free Guarantee