Can a Taser Injury Be Caused by Police Brutality? 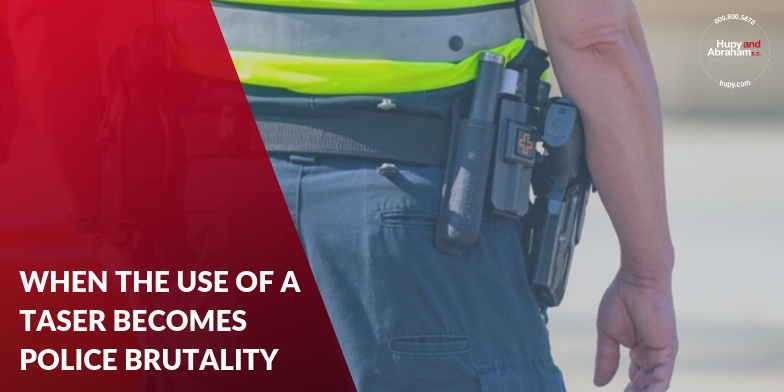 Since the 1990s, police officers have been using Tasers in the course of their work. Tasers look like guns, but they do not shoot bullets. Instead, they shoot significant volts of electricity. When the electricity hits a human then the person’s central nervous system is temporarily paralyzed, the person becomes incapacitated, and the police may be able to control a dangerous situation without the use of bullets.

While Tasers may protect lives by preventing the use of lethal force, they are not risk-free.

Serious Injuries and Deaths May Result From Tasers

Anyone may be at risk of suffering these types of injuries from a Taser. However, people on certain medications, people with underlying health issues, pregnant women, children, and the elderly may be at an increased risk of getting hurt or dying.

Tasers May Be Reasonable Force in Some Situations

If proper procedure is followed and the use of the Taser is not excessive force, then you may not have a claim for police brutality. This is not always the case, however.

When the Use of a Taser Becomes Police Brutality

If the use of a Taser was more force than necessary to control the situation, to protect the public, or to take a suspect into custody, then the use of the Taser may have been excessive force on the part of the police. The details of the situation must be taken into account when determining whether the police officer’s use of a Taser amounted to excessive force. Every situation is unique. However, some relevant details may include whether:

Other factors about your individual situation will also be relevant. Therefore, it is important to relate the entire story in as much detail as possible to your police brutality lawyer as soon after the incident as possible. That way, the details will be fresh in your mind and will be less likely to be forgotten.

Excessive police force may violate your rights under the Fourth Amendment to the United States Constitution which protects you from unreasonable seizure. It may also violate state and federal law. If you have been hurt by a Taser, or your loved one was killed by a Taser, and you believe that the police officer used excessive force when using the Taser then it is important to talk to an experienced police brutality lawyer as soon as possible.

An attorney will review all of the facts of your case, including any videos, and advise you of your legal rights. If you have a potential police brutality case, then your lawyer will discuss what you should do next.

Please contact us online or call our office directly at 800.800.5678 to schedule your free, no-obligation consultation today. We welcome your visit to our Rockford, Gurnee, or Bloomington office or we would be happy to come to you if that is more convenient.

Protect Your Rights After an IL Stop and Frisk or Strip Search Incident
How to Know if a Police Shooting Is Police Brutality
Police Brutality Wrongful Death Lawsuits in Illinois
Illinois Prisoners Should Live Free From Prison Abuse and Neglect
Can a Taser Injury Be Caused by Police Brutality?
Win or it is Free Guarantee