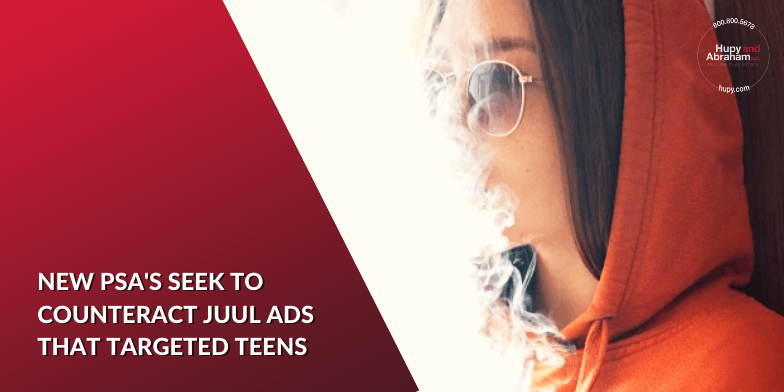 Soon, you might see a new television commercial featuring magician Julius Dein using tricks to teach teens about the risks of e-cigarettes. These commercials are part of the United States Food and Drug Administration’s (FDA’s) recent efforts to protect teens from the serious health risks of vaping and e-cigarette use.

The FDA ads are likely not the first e-cigarette ads your children have seen if they have social media accounts.

JUUL Labs, Inc. introduced its first e-cigarette in the United States in 2015. The e-cigarette that was introduced then, and that is still sold today, closely resembles a USB flash drive rather than a traditional cigarette. The device can be filled with different flavored cartridges or pods, sold as JUULpods.

In 2019, researchers from Stanford Research into the Impact of Tobacco Advertising at Stanford University School of Medicine released a report about JUUL advertising from 2015 – 2018. The researchers found that:

While JUUL Labs was allegedly marketing its e-cigarettes to minors, it was also reportedly telling students that its products were safe. In September 2019, the FDA informed JUUL Labs that the company had marketed its product as “modified risk tobacco product” without an FDA order. Specifically, the FDA found that JUUL representatives made statements to students in schools that JUUL products are “99% safer” than cigarettes,” “much safer than cigarettes,” “totally safe,” and “a safer alternative than smoking cigarettes.”

Risk of Injury to Teens

JUUL representatives, influencers, and marketers may have told teens that JUUL products are safe, and JUUL may assert that its products are meant for adults—but if you have a teenager, then there is some other information that you need to know.

E-Cigarette Use Rising for Teens and Young Adults

Researchers from the University of Iowa College of Public Health published a research letter in the October 14, 2019 edition of JAMA Internal Medicine. These Iowa researchers looked at the trend of e-cigarette use nationwide and found that from 2014 to 2017 there was an overall decline in the number of adults using e-cigarettes in the United States. The number of adult e-cigarette users rose slightly from 2017 to 2018 because of a significant increase among young adults age 18-24. Researchers found this disturbing trend may be partly caused by flavored and discreet pod-based e-cigarettes, such as those made by JUUL Labs.

The Centers for Disease Control and Prevention (CDC) present similarly alarming data about the use of e-cigarettes among middle and high school students. According to the CDC:

While not every middle and high school student using e-cigarettes is using JUUL products, JUUL Labs currently has the greatest market share and is the most prevalent manufacturer of e-cigarettes in the United States.

In their October 2019 research letter, the University of Iowa researchers note that the increased use of e-cigarettes among young adults is a concern because, “…nicotine exposure can harm the developing brain, and e-cigarette use may lead to a transition to subsequent cigarette smoking.”

Additionally, teenagers who vape or use e-cigarettes may have an increased risk of developing:

Protect Your Teen’s Recovery After a JUUL Injury

A lawsuit may allow your child to recover compensation for past and future medical costs, lost income, out-of-pocket expenses, emotional suffering, physical pain, and other damages.

Begin protecting your child’s rights now by contacting Hupy and Abraham for a free, no-obligation consultation in our Cedar Rapids, Des Moines, or Davenport office or at a location that is convenient for you.