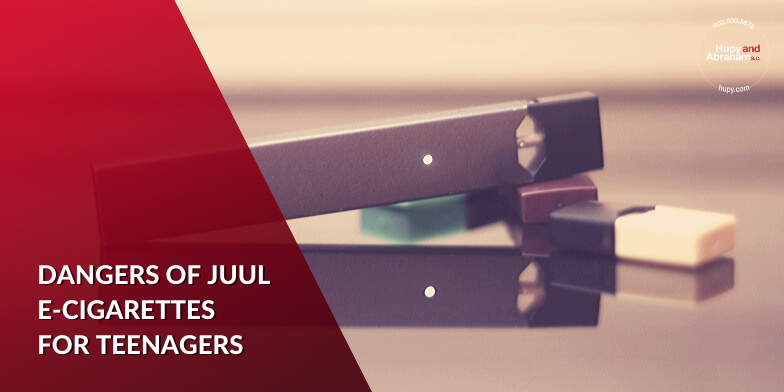 It may look like a flash drive, but the device in your teen’s backpack or bedroom may contain nicotine rather than homework.

In 2015, JUUL Labs introduced its e-cigarette in the United States. JUUL’s e-cigarette, unlike other types of e-cigarettes, closely resembles a flash drive. The e-cigarette is charged in a regular USB port and can be filled with different kinds of JUULpods, including Virginia tobacco, classic tobacco, menthol, fruit, cucumber, crème, mint, and mango. Flavored pods often appeal to minors and young, new smokers.

Safety of JUULpods Called Into Question

JUUL e-cigarettes pose serious health risks for teens and adults who use them. The special flavorings, nicotine, and other substances contained in e-cigarettes may contribute to:

It took many years to understand all of the risks of smoking traditional cigarettes fully, and e-cigarettes are too new to the market to assess all of the risks. However, JUUL may not have been forthcoming about the safety risks described above and others.

Instead, despite these significant health risks, the United States Food and Drug Administration (FDA) claims that JUUL has marketed its products as safer than traditional cigarettes. In testimony before a United States House Subcommittee in July 2019, evidence was submitted that JUUL told students that its products were “totally safe,” that the “FDA would approve it any day” and that using JUUL was “a safer alternative than smoking cigarettes.”

In August 2019, the Lake County State’s Attorney’s Office in Illinois filed a lawsuit against JUUL Labs. The lawsuit alleges that JUUL violated the Illinois Consumer Fraud and Deceptive Business Practices Act and the Prevention of Tobacco Use by Minors and Sale and Distribution of Tobacco Products Act by marketing its e-cigarettes to teenagers.

According to Lake County State's Attorney Michael G. Nerheim, “…JUUL preyed on teens by using advertisements that glamorized their product in order to get kids hooked on nicotine…” He compared JUUL’s marketing practices to the deceptive advertising practices of big tobacco companies in the past.

The Illinois lawsuit against JUUL alleges that:

Overall, the lawsuit claims that JUUL created a public health crisis that has hurt many children and that will take many years of education to undo.

JUUL maintains that it never targeted its e-cigarette marketing to minors. Recently, the company removed itself from Facebook and Instagram to reduce and prevent social media content aimed at teens that were generated by people other than JUULworkers.

The State of Illinois is seeking fines for each violation of the Illinois Consumer Fraud and Deceptive Business Practices Act and punitive damages.

Your Teen Deserves a Fair Recovery From JUUL

Teenagers who suffer from serious lung conditions or addiction because of JUUL’s marketing practices deserve to make fair financial recoveries. Those recoveries won’t come from a state lawsuit, and teens under the age of 18 do not have standing to file their own lawsuits. Instead, you, as your child’s parent or guardian, need to take action.

You have the right to file a lawsuit on your child’s behalf and for your child’s benefit if your child has been hurt by a JUUL product. Your child’s recovery could include past and future medical costs, lost income, out-of-pocket expenses, physical pain, emotional suffering, and other damages.

To learn more, please schedule a free consultation with our experienced injury lawyers at your home, your child’s hospital room, or in our Bloomington, Gurnee, or Rockford offices. Together, we will fight to get your child a full and fair recovery.