Have You Had an IVC Filter Implanted Since 2004? 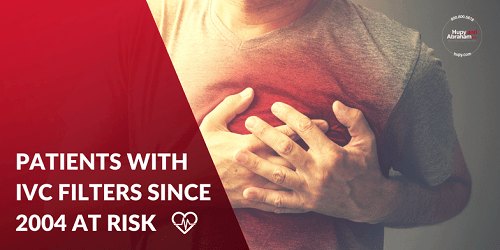 More than 8,000 people have filed lawsuits alleging that the manufacturers of IVC filters knowingly distributed potentially harmful products to the public.

IVC filters are small, metal devices designed to prevent blood clots from reaching the lungs or heart. Since being invented in 1973, hundreds of thousands of patients have had these devices implanted on an annual basis.

Some patients are advised by their doctors that they’re at risk for life-threatening clots and traditional blood thinners may not be sufficient. Some IVC filters are installed on a permanent basis, but most are intended to be removed, once the risk of a clot has passed.

Unfortunately, thousands have reported serious complications in association with these devices. It has been claimed that these filters can come loose and potentially perforate organs or pierce blood vessels, causing serious damage.

The FDA issued a warning in 2010 stating that they’d received 921 reports of adverse effects since 2005. Though there are several different IVC filter manufacturers, in 2015 the FDA specifically warned Cook Medical and C.R. Bard about marketing a product that has been significantly altered since being approved.

Lawsuits against IVC filter manufacturers were initiated in 2017. As of now, more than 8,000 people have filed and there could be thousands more to follow.

Plaintiffs are alleging that the manufacturers were aware of the dangers and failed to warn doctors and patients. Some cases have already settled for as high as $3.6 million. Other individual cases have settled for undisclosed amounts.

If you’ve had an IVC filter implanted any time after January 1, 2004, you may be entitled to financial compensation. Call the personal injury lawyers of Hupy and Abraham at 800-800-5678 for a free consultation.