Important Information for Bicyclists, Motorists, and Those Who Love Them 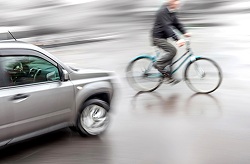 Exercise, fuel conservation, and enjoyment are just some of the reasons why people ride their bikes in Wisconsin, Illinois, and Iowa. Regardless of why they are riding, however, every rider has the right to be on the road and to be safe.

The Truth About Bicycle Accidents in Your State

The latest statistics indicate that in:

It is important to remember that for each fatality reported a life was ended too soon.

As with all other types of traffic accidents, there are many potential causes for serious bicycle crashes. Some of the more common causes of bicycle accidents include:

Drivers have a responsibility to riders and will be held accountable if they cause an injury or death in a bike crash.

There are many potential injuries that can occur after a bike crash, including:

If you’ve been hurt and a driver is at fault for causing your accident, then you may be able to recover damages for your injuries, but you shouldn’t count on the insurance company to write you a check of a fair settlement unless you demand it through settlement negotiations.

How to Protect Your Recovery and Prevent Future Bike Crashes

riders who are hurt—or the survivors of those who are killed—deserve to make a fair recovery for the harm that has been done by a driver’s negligence. You can get started protecting your own recovery of medical expenses, lost income, funeral costs, out-of-pocket costs, and other damages by finding out exactly what caused the crash, by getting the medical attention you need, and by contacting an experienced bike accident lawyer.

If you, your child, or someone you love rides a bike, then we encourage you to read our FREE brochure, “Your Guide to Bicycle Safety,” and to share this article on Facebook or Twitter so that others can learn more about the dangers of, and recoveries from, bike crashes.

Marathon County, Wisconsin Traffic Accident Statistics
Dane County Wisconsin Accidents, Injuries, and Fatality Statistics for 2020
What Happened on Brown County, Wisconsin Roads in 2020?
Where Did Outagamie Accidents Occur During 2020?
2020 Milwaukee County, WI Motor Vehicle Accidents
What Kind of Car Seat Does Your Child Need in Wisconsin?
The Danger of Drivers Under the Influence of Opioids
Win or it is Free Guarantee