Is it against the law to drive if you’ve recently used marijuana in Iowa? 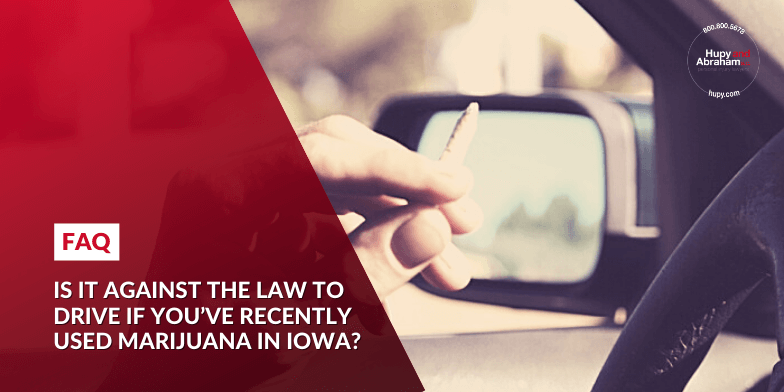 Yes, Iowa law makes it illegal to drive with any amount of THC in your system.

How to Know If a Driver Is High

There is no simple test for determining whether a driver is under the influence of marijuana. Without the benefit of a test like a breathalyzer that is used in suspected drunk driving accidents, police and accident lawyers must look to other evidence. Other evidence may include:

Together, this evidence may help you know what caused your crash even without a conclusive test being administered to the driver.

Get Help After an Iowa Crash

Driving while under the influence of marijuana is one form of negligence, and our experienced car accident lawyers will find out if that, or something else, was the cause of your crash. Call us today to schedule your free consultation in any of our Iowa offices, your home, or hospital room.

As an Iowa parent, what do I need to know about teen distracted driving accidents?
How many people died in Iowa motor vehicle accidents in 2020?
What should I do if I was in an auto accident while driving a rental car?
I was a passenger in a roadway departure accident. What should I do now?
Is it possible to suffer memory loss in a car crash?
What should I do if an Uber driver crashes into my car?
How can I get a copy of a Cedar Rapids police report after an accident?
Win or it is Free Guarantee