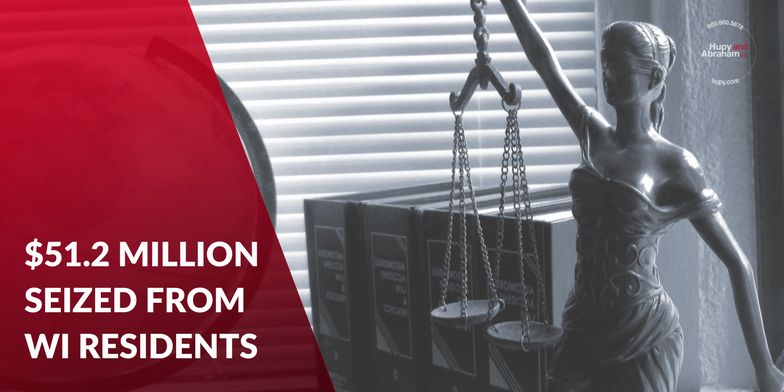 Signed into law by Governor Walker in April 2018, SB 61 changes the forfeiture laws in Wisconsin.

Civil asset forfeiture allows government agencies to take ownership of personal assets from people accused of criminal activity, even if formal charges were not filed.

According to Jesse Hathaway, Research Fellow at the Heartland Institute, between 2000 and 2013, about $51.2 million in assets and money was seized from Wisconsin residents, or about $3.6 million each year. Where did that money go?  It was laundered back to Wisconsin local and state police departments and government agencies, even if no conviction of criminal activity ensued.

Allowing the forfeiture of property, even if no criminal charges or convictions follow, creates economic incentives for government agencies. With no penalties imposed for wrongful seizures, taxpayers end up paying for illegal forfeitures when assets are ordered returned to the innocent.

Although these forfeitures involved property seized in suspected criminal activity, it’s like a situation we faced in the early 1990s in Wisconsin regarding the confiscation of motorcycles. Hupy and Abraham, S.C. worked with ABATE of Wisconsin to remedy a problem where motorcycles were confiscated on the assumption the VIN was altered or the bike contained stolen parts. Sometimes, the owner of the cycle heard nothing more about his property for six months and in some cases over a year. If not challenged, the motorcycle would be lost permanently. Our firm worked to change the existing forfeiture law in Wisconsin to add the word “motorcycle” to the statute and place a time limit on how long law enforcement agencies could hold property without starting formal forfeiture proceedings. That limit was 30 days. We went to court, pro-bono, representing several individuals whose property was seized, and the courts ordered return of the motorcycles because no forfeiture actions were started within 30 days of the seizure.

Senate Bill 61, authored by Senator David Craig, reforms the state’s asset forfeiture laws to prohibit the state from taking property without criminal conviction in most situations.  “Civil asset forfeiture reform is an important step to ensure that no person is, ‘deprived of life, liberty or property, without due process of law’ as guaranteed by the Fifth Amendment,” said Craig.

“Civil asset forfeiture reform is not about punishing law-enforcement officers,” said Jesse Hathaway. “In fact, its goal is the opposite: By removing the economic incentives that now exist, we can help ensure citizens trust the current system, leading to improved community-police relations.”