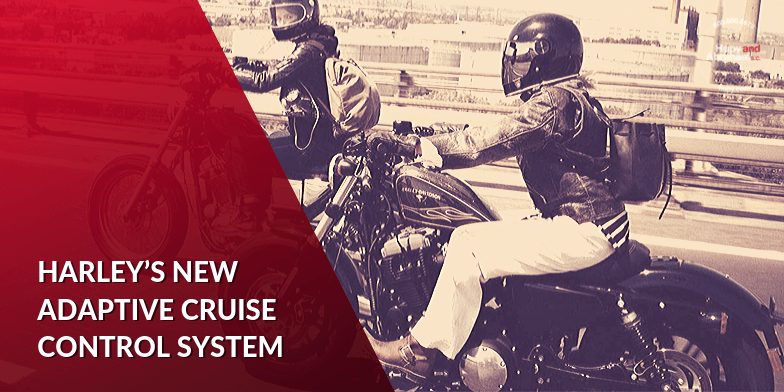 Adaptive cruise control isn’t exactly brand-new technology. Automakers have been rolling out this tech in new vehicles lately as an extra safety measure – the use of radars allows vehicles in cruise control to automatically note and react to the changes in speed of vehicles ahead of them. This means that should a driver be in cruise control and cars ahead of them begin to slow down, the car will detect the slowing vehicles and slow its own speed in response to prevent any possible collisions.

Motorcycle manufacturers have begun to implement this technology, as well with big names like Ducati and KTM including adaptive cruise control on new bikes currently in production. Milwaukee-based motorcycle manufacturer Harley-Davidson has also entered this area with a recently published patent application that shows its own take on adaptive cruise control. Where most adaptive cruise systems simply note the presence of vehicles ahead of it, the new system in production by Harley will be a bit more sophisticated – able to distinguish between regular motor vehicles and motorcycles.

Harley’s conceived system will differ from the majority of adaptive cruise control systems in that it will feature integrated cameras that will be able to identify individual motorcycles. The system will also be programmed to dynamically track other motorcycles and regulate speed to maintain an effective staggered formation making it a great benefit to riders that regularly participate in group rides (check out our article on that subject here).

This system will work significantly better for group rides than typical adaptive cruise control as most current systems will incorrectly set the “target vehicle” – the vehicle it monitors for speed fluctuations – as the vehicle directly in front of it. This can be an issue in group rides as the closest motorcycle to you is almost never directly in front of you in the ideal staggered formation.

The new system developed by Harley will also feature similar rear-facing sensors to other systems that serve as blind-spot monitors to alert riders to vehicles that may be hidden in a blind spot. There is currently no indication of when riders can expect to see these proposed new systems included on new Harley-Davidson motorcycles, but with the 2020 lineup already unveiled, it likely won’t be until at least 2021 that riders can actually get their hands on this new technology.

For more motorcycle tips, news and industry updates, check out our other articles on our Current News for Riders page on hupy.com.