The Scoop on Scooters In today’s day and age, scooters are a popular way to travel. Their light weight, cost effectiveness and agile characteristics make them a desirable mode of transportation for a wide range of people, from college students to the corporate world. As popular as they are though, few people know what scooters actually are, and how the law applies to them today.

Scooters as we know them first came into production in 1946. In postwar Europe, they were a budget-minded solution to a transportation cost pro blem. Founded in 1884, the Italian company Piaggio produced the first scooter, which they called a “Vespa” meaning “wasp” in Italian (allegedly after its shape and sound). By 1956, Vespa production had reached the one million mark, and sales had spread across the world. In the U.S., Vespas were seen as a hot ticket item for everything from celebrities to blue collar workers. Leaving the market briefly in 1985 due to emission standards, sales resumed in 2000 and continue to be going strong today. is an actual scooter? According to the Department of Motor Vehicles (DMV), a scooter (or “motorized scooter”) is like a traditional foot-propelled scooter, except with an engine attached. The operator of a “motorized scooter” is usually in the standing position, however some may also have a bicycle seat. The law treats motorized scooters like an off-road motor vehicle (tractors, go-karts, mini-bikes, etc.) in that they’re not legal to operate on public roadways. However, since they’re a motorized vehicle, a license is sometimes required by law to operate one.

The laws for mopeds and motor driven cycles (“scooters” for the purpose of this article) vary from state to state, however some are universal. Generally scooters or mopeds below 150 cc are not allowed on freeways, and even at 150 cc, freeway speeds are hard to maintain and hard on the machine. “Two up” (two passengers) riding on a moped is generally prohibited or only allowed if the moped is specifically designed for it, and some states (such as Iowa) require small safety flags to be displayed at all times. Most states, including Wisconsin, Illinois, and Iowa, require a moped to be titled and registered, and many require insurance as well. Make sure to be well informed about your state’s laws when purchasing a scooter. Sometimes a manufacturer’s certification label is required to even be able to register a moped (IA).

At Hupy and Abraham, we encourage you to stay up to date on not only the safety regulations in your state, but also any changing laws that may apply to what you’re riding. As the modern day scooter and moped continue to grow in popularity, be sure to be well prepared by checking with your local DMV before operating your new ride! 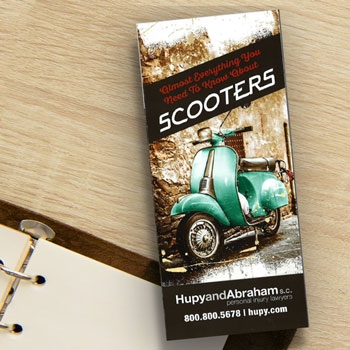 Almost Everything You Need to Know About ScootersRequest Information 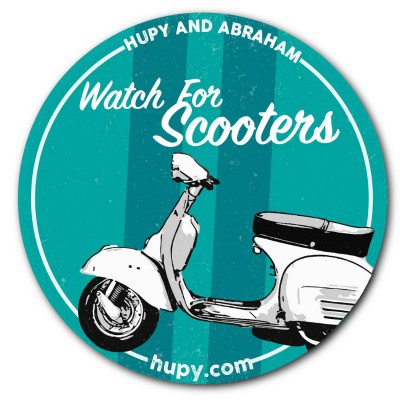 Get Your FREE 'Watch For Scooters' Bumper StickerRequest Information