Studies Show Driving Sick is as Bad as Driving Drunk 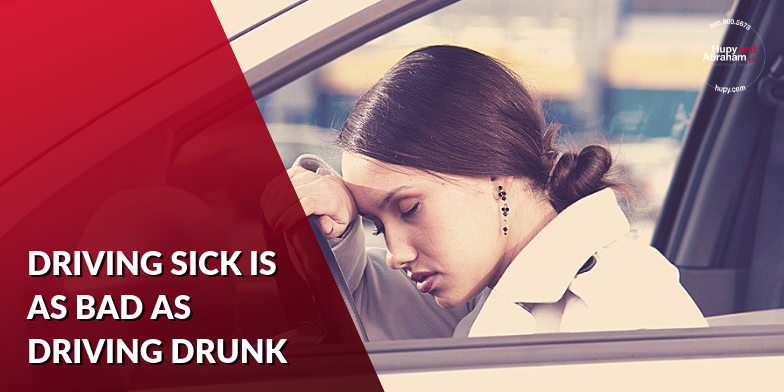 Everyone understands that it’s dangerous to operate any motor vehicle — motorcycle, car, or even a snowmobile — after drinking too much. But new research from the United Kingdom suggests that it may be equally as risky to take to the road when you’ve got a cold.

The British insurance company Young Marmalade funded the study. Their researchers attached sensor devices, like the “black boxes” used in airplanes, to thousands of cars. Other test subjects with cold symptoms were given driving-simulator tests. The result of the study suggests that driving while having a heavy head cold reduces key skills by half — functionally equivalent to having had four double whiskies before driving.

Nigel Lacy of Young Marmalade Auto Insurance was quoted as saying, “When a driver had a cold their reactions were much slower. They were braking later, their cornering was a little more erratic. Having a cold and trying to drive is almost like having loads and loads of drinks.”

The findings confirm the natural expectations of some people familiar with U.S. roads. Keith Leary, of the Washington State Police, remarks that driving while unwell means that “you’re more focused on your cold than you are on your driving.” He suggests that this should be a touchstone for making decisions about driving: “You should be evaluating yourself,” he said. “Can I drive safely while I’m feeling as ill as I am?”

The study’s researchers say that the effect of diminished driving ability is most likely due to poor sleep while having a cold. Medication was not a factor.

Projecting the British statistics from the study to the U.S. population, it could be that up to 600,000 traffic accidents a year can be attributed to drivers with colds.

The experienced attorneys of Hupy and Abraham wish to remind all our neighbors that cold and flu season lasts well into the spring here in the upper Midwest. Not only does illness impede your ability to control your vehicle or your bike, but a number of prescription and over-the-counter cold treatments can cause drowsiness and blurred vision. When you’re not feeling at your prime, stay home.

If you’ve been hurt by a negligent driver, please start a live chat with us now so that we can schedule a free consultation and begin working on your legal recovery.