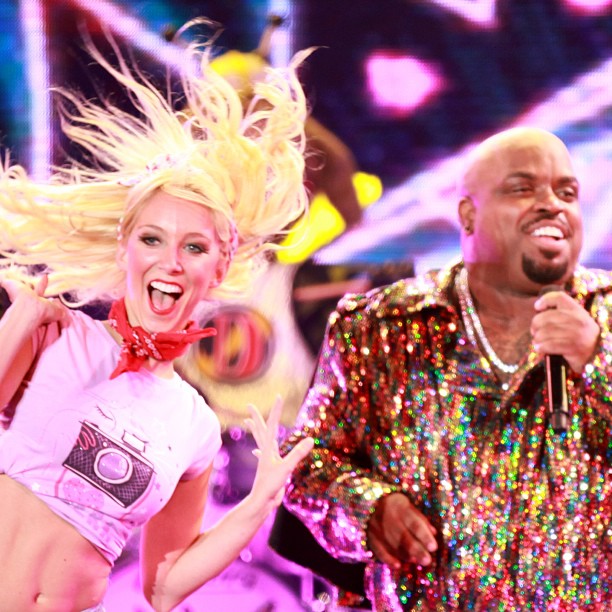 Maxine Hupy, daughter of Attorney Michael Hupy, has fulfilled a lifelong dream by performing as a dancer alongside music superstar CeeLo Green. The dancing prodigy landed a role in Green’s CeeLo Green Is Loberace show in Las Vegas, which wrapped up in the spring but is tentatively set to return in 2014.

After completing the two month series of performances, Maxine said she loved performing with Green and complimented his “unbounded energy.” She then accompanied Green on an international tour and also performed alongside Aerosmith, Carly Rae Jepsen and Psy in Singapore. Recently, Maxine appeared on Late Night with Conan O’Brien with CeeLo’s group, the Goodie Mob, as they performed his new song “Amy.”

In the near future, Maxine is set to appear as a professional dancer and choreographer in Season 3 of Dance Showdown, which is similar to Dancing with the Stars except that it features YouTube celebrities instead. The first two seasons have been a major success and tallied millions of views on the web.

As a young dancer, Maxine learned the art of stage presence as she was the youngest to dance in the role of Marie in the Milwaukee Ballet’s Nutcracker at age 13. She went on to perform with the Graffiti Dancers and in the Waa-Mu Show while studying at Northwestern University. She was also recently featured in NU’s Alumni magazine for her dancing exploits.

Furthermore, she appeared in “Flash’d”, a popular flash mob video with former American Idol finalist Todrick Hall and pop star Ariana Grande as well as a fitness DVD produced by the Bollywood-dance inspired fitness and media company, Doonya. A trailer for this DVD aired on The Today’s Show. NFL Cheerleaders have even sought Maxine’s expertise and she helped train them by demonstrating new dances.

Maxine has also used her dancing talents to give back to the community. In 2011, she participated in Northwestern University’s “Dance Marathon” that raised over $1,000,000 for the Children’s Heart Foundation. By dedicating her time to help others, Maxine is proving that the apple doesn’t fall far from the tree. Attorney Michael Hupy, who taught her to be philanthropic, has also donated much of his time and financial resources to help those in need.

To find out what’s next for Maxine, be sure to connect with her on all of the major social media platforms. Maxine can be found on Twitter (@maxinehupy), Instagram (maxinehupy) and YouTube (www.youtube.com/maxinehupy).