Recognized as Benefactor for the Milwaukee Justice Center 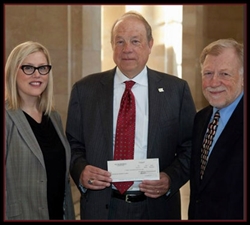 Attorney Michael Hupy was named principal benefactor at the Grand Reopening of the Milwaukee Justice Center on September 15. The ceremony took place at the remodeled MJC, which is located in Room G-9 of the Milwaukee County Courthouse. The Center was temporarily moved to Room 511 of the courthouse while the remodel was in progress. During that transitional stage, the MJC was only able to help six clients at a time with little privacy or comfort.

Attorney Hupy is a founding member of the MJC. In fact, he was one of the first people approached about the idea of the Center and pledged to give $100,000 so it could transform from an idea to a reality. The Milwaukee Justice Center has helped over 20,000 people in the past two years. A majority of clients served have had incomes significantly below the poverty level.

Attorney Hupy has said, “There are times when duty calls and we must step up to the plate for the public good to fulfill our professional obligations.” His most recent monetary gift to the MJC was in spring 2014. When he is able, Attorney Hupy stops by the Center to answer questions from clients.

Since its inception, the Milwaukee Justice Center has exceeded all expectations - those involved with the project consider this a new era for the MJC. The expanded quarters can now accommodate 14 client consultations at one time. The new space comes with many additions that would not be possible if it were not for the generosity of people like Michael Hupy. The bigger space also allows for the Legal Resource Center and the Records Center to relocate into Room G-9, creating a “one-stop shop” for those with low incomes and resources.

Hupy and Abraham has been contributing to the community for decades. The firm has donated more than $500,000 to more than 100 worthwhile causes in the past 3 years.