The Wisconsin Joint Finance Committee, in order to balance a massively indebted transportation fund, has proposed imposing a bicycling tax 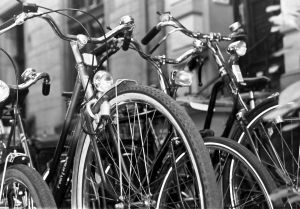 in the state. In order to compensate for debt caused by several highway construction projects, the committee is seeking an alternative funding source for the state's Complete Streets program. The Complete Streets program requires the Department of Transportation (DOT) to consider bicycle and pedestrian infrastructure in all new highway construction and reconstruction projects funded by state or federal funds. The committee’s proposal is a statewide bicycle fee of $25 per bike at time of purchase, on top of existing sales tax.

Proponents of biking in Wisconsin, like the Wisconsin Bike Fed, believe that these taxes disproportionately target bicycles and effects taxpayers, businesses and tourism in the state. The proposed $25 tax is causing concern because the funds collected would be deposited into the transportation fund, and not earmarked specifically for cycling-related projects. People who bike regularly reduce wear-and-tear on infrastructure, reduce physical and environmental harm, while also paying regular vehicle registration fees and gas taxes. Therefore, many feel unfairly targeted by the tax, especially if the funds aren’t guaranteed to benefit cycling in Wisconsin.

Due to the presence of many local bike companies such as Trek, Schwinn, and Saris, even those who don’t ride bicycles can appreciate the economic and employment opportunities associated with promoting cycling in Wisconsin. Bicycling is a $1.5 billion industry in the state generating nearly 14,000 jobs, and while the legislature has sought to reduce taxes on Wisconsin businesses, a tax such as this could seriously harm the local bicycling industry. A bicycle tax limited to Wisconsin could potentially undermine the model that helps local bicycle shops compete with other companies selling directly on the Internet. When buyers have the option of avoiding the tax online or elsewhere, it may hurt the independent bike dealers in in the state.

Those who oppose the law say they understand the need for infrastructure funding, but believe that the Joint Finance Committee should consider creating a committee to study and identify program concerns first. One suggested alternative is to create a separate, dedicated revenue source for bicycle infrastructure.

For a time, Wisconsin led the Midwest and the nation in miles of bicycle trails and bike friendliness. The League of American Bicyclists ranks states for their bike friendliness, yet Wisconsin's ranking has dropped from No. 3 to No. 9 as it’s been surpassed by states like Minnesota and Michigan who have taken greater steps to include bicycling in their transportation programs.

Biking is an integral part of what makes Wisconsin special, and significantly improves the quality of life for those who do it, and those who don’t. It would be a shame for Wisconsin to lose funding and programs that help keep cycling a safe transportation option for many, as would the implementation of a tax that doesn’t directly support the activity.

As supporters of safe bicycling practices and the programs that make them possible, Hupy and Abraham hopes that whatever the Joint Finance Committee decides, cyclists will always have a safe space in which to ride in Wisconsin. Get your FREE Watch for Cycles sticker here, and spread awareness to support bicycling and bicycling safety in Wisconsin.