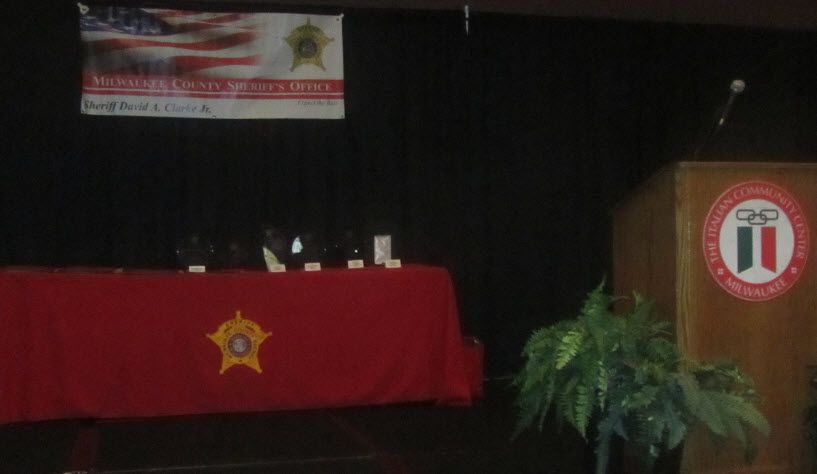 On Tuesday, September 17, many of Milwaukee’s most honorable public servants gathered for the Milwaukee County Sheriff’s 2013 Awards Ceremony to recognize deputy sheriffs and community members for their acts of service. Thanks to sponsors like Hupy and Abraham, the entire event was funded without any taxpayer support.

Public Information Officer Fran McLaughlin emceed the event while Milwaukee County Sheriff David Clarke presented Letters of Commendation and Community Service Awards to all of the recipients. The 2013 Sheriff’s Superior Achievement Award was presented to Deputy Sheriff Jeffrey Mike, who successfully performed CPR on an incapacitated baby, and Deputy Sheriff Douglas Burmeister received the Medal of Valor for withstanding a vicious attack before apprehending an unruly citizen during a sobriety test.

Other deputies were also recognized such as Deputy Sheriff Gary Mason, who three times confronted drunken wrong-way drivers without an accident, and Deputy Sheriff Roberto Hernandez, who saved a drowning girl in the Kinnickinnic River.

The keynote speaker for the ceremony was Pardeep Kaleka, whose father served as the president of the Sikh Temple of Wisconsin before being gunned down last August. Kaleka spoke passionately about his dream to change the world, starting with the Milwaukee community.

By sponsoring the Milwaukee County Sheriff’s Awards Ceremony, the Milwaukee-based law firm of Hupy and Abraham has demonstrated its commitment to giving back to the community that made the firm successful.