How to Settle Your Dog Bite Injury Case 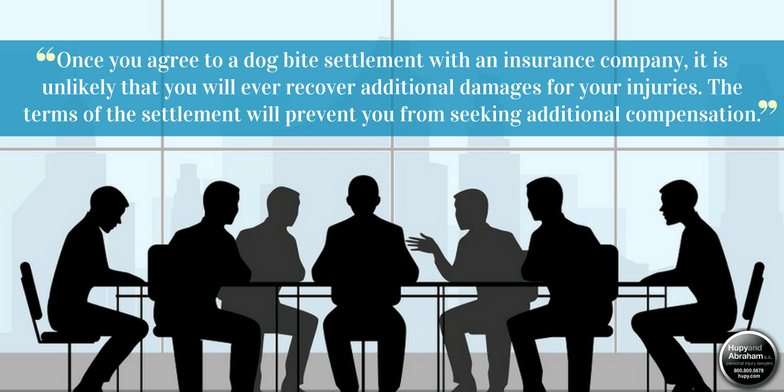 Financial loss, along with other damages, can and should be sought if you’ve been hurt by a dog. A claim can either be settled outside of a trial or decided in a trial.

Benefits to an Out-of-Court Settlement

Many people prefer to settle their claim outside of a trial. The benefits of doing so include:

But settling a case is not as easy as asking an insurance company for money.

Once you agree to a dog bite settlement with an insurance company, it is unlikely that you will ever recover additional damages for your injuries. The terms of the settlement will prevent you from seeking additional compensation. Accordingly, you need to be confident that the settlement you accept is a fair settlement for the injuries that you have suffered.

What Does “Fair” Include?

A fair settlement is one that compensates you for your injuries, taking into account:

There Is No Formula to Calculate “Fairness”

The same injuries could fairly result in different financial recoveries for different dog bite victims. It is impossible to plug numbers into a formula to come up with a fair recovery. Instead, it is important to speak with an experienced dog bite attorney who has settled cases before and who knows how to successfully negotiate with insurance companies. To schedule your own free, no-obligation consultation with such a lawyer, or for more information about how a dog bite case works, please start a live chat with us today.