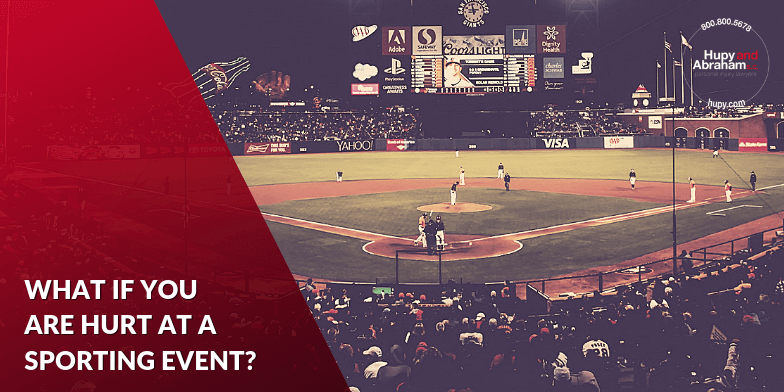 Attending baseball games and other sporting events is a quintessential American pastime. However, it is not uncommon that an accident can result in the injury of a fan.

Hit by a foul ball:

In July 2015, a fan attending a Brewers/Braves baseball game at Milwaukee’s Miller Park was struck in the face by a foul ball. The fan sustained near-fatal injuries that have resulted in over $200,000 in medical bills and will require lifelong care. In August 2016, another fan was struck by a line-drive at Miller Park.

Unfortunately, Miller Park isn't alone when it comes to spectator injuries. A 2014 study by Bloomberg News found 1,750 fans per year were injured by foul balls at Major League games. In 2018, A woman died after being hit in the head with a foul ball at Dodgers Stadium, making her the first foul-ball fatality in nearly 50 years. Spectators of hockey and NASCAR are also at risk of potentially hazardous projectiles at games and races as well. But if you are injured by a foul ball or stray hockey puck that flies into the stands, who is responsible for your medical bills, or possible lost time at work?

The answer, unfortunately, is you.

“Assumed Risk” and your ticket:

Assumed risk falls into the category of liability that applies to the so-called “baseball rule,” that is implemented in both professional and amateur leagues. If you read the fine print on the back of your ticket to a sporting event, it usually outlines refund policies and rules regarding flash photography. This is also where you will find that statement of assumed risk, which is why the venue isn’t liable for your injuries.

It is assumed, that when choosing to attend a sporting event, the spectator understands that flying objects may enter the seats. And it is the spectator’s responsibility to avoid them.

While most risks at sporting events are considered "inherent to the game," there are situations in which negligent circumstances would hold the stadium/venue liable for injuries. For example:

Unfortunately for many, this baseball rule was adopted when the game was quite different. Things happen a lot faster on the field these days and the entertaining nature of the sport often creates more “sideshows” that distract fans from what is happening on the field.

We are forced to assume a certain level of risk any time we attend a spectator sport. So even with nets and barriers to protect fans, the most you can do is to always be alert while watching a game.

Hupy and Abraham, or any other firm, unfortunately, cannot help if you're struck by a baseball. But, if you or a loved one is ever injured due to the negligence of a sports venue, please contact us right away to discuss compensation. Call 800-800-5678 for a free consultation, or start a live chat with us now at Hupy.com.