Hupy and Abraham: Committed to the Center for Teaching Entrepreneurship (CTE) and Harvest for Hope 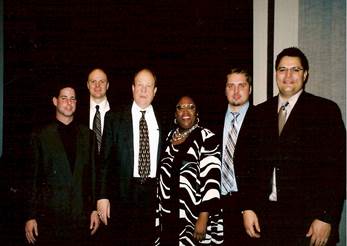 Hupy and Abraham, and Attorney Hupy personally, have a long and committed history with the Center for Teaching Entrepreneurship (CTE). It is the mission of CTE to help young people, aged 9-24, see themselves as the “CEO of Me” and to empower them to become successful and competitive professionals and entrepreneurs. CTE offers a variety of programs that promote business and life skills to Milwaukee youth. The organization researches, develops, implements and advocates for programs that utilize the fundamentals of entrepreneurship and promote financial and personal responsibility.

Each year, CTE hosts an annual Harvest of Hope celebration. Here are some ways that our firm was involved in the early 2000’s:

In June 2010, the Center for Teaching Entrepreneurship held its Celebration Dinner celebrating the entrepreneur projects of nine CTE students in the class of 2009-2010.  The projects were part of the Young Entrepreneur Career Development Program.  The event was held at the Doubletree Hotel in downtown Milwaukee and was well attended by students, teachers and parents and business leaders from the Milwaukee area.  The event was coordinated by two students, Nurys Uceta and Terese Shurn of Planning Made Easy.

Attorney Todd Korb from our firm spoke at the event about the value of education.  Awards were given to the students for their projects while several students gave very detailed presentations on their entrepreneur projects.  CTE CEO Redonna Rodgers ended the program on a high and inspiring note with a speech encouraging all to chase their dreams, and she thanked Hupy & Abraham for its generous sponsorship of five Hoop It Up teams.

CTE serves over 1,000 youth annually. Of the program participants, 100% complete high school, 80% go on to pursue higher education and 93% are employed. In addition, 100% of CTE students remain drug free, stay clear of gangs and have not become teen parents. It is an important cause that we encourage others to become involved in by visiting the CTE website and it is a program that we continue to support.