Which states use the most glyphosate? 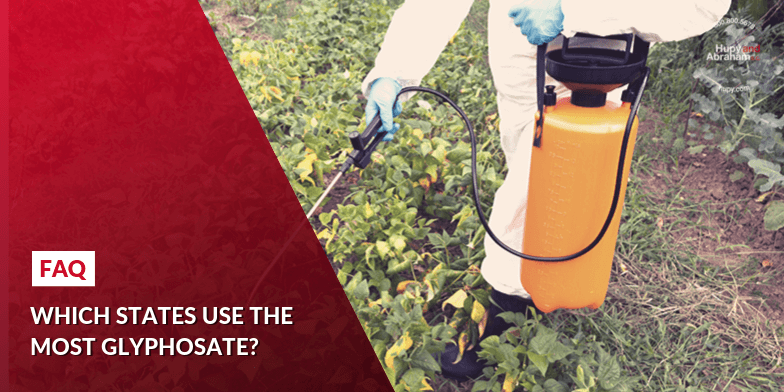 Glyphosate products, such as Roundup®, are used throughout the country, and glyphosate products are the most commonly used herbicides in the United States. However, according to information from the U.S Geological Survey’s 2016 Estimated Annual Agricultural Pesticide Use report, some states use significantly more glyphosate than other states.

In 2016, the most recent year for which data is currently available, Illinois used more kilograms of glyphosate than any other state in the United States. During that year:

While Illinois had the highest amount of glyphosate use, glyphosate products made up only 33% of the state’s total pesticide use.

It doesn’t take a lot of glyphosate exposure to cause cancer. If you have been exposed to Roundup® products and develop non-Hodgkin lymphoma, then glyphosate could be a cause of your illness.

Other people who have developed non-Hodgkin lymphoma from Roundup® use have successfully sued Monsanto for millions of dollars in damages. Thousands of other cases are pending, and others have yet to be filed.

If you are injured, or your loved one is killed, then now is the time for you to take action. The award-winning injury lawyers of Hupy and Abraham are here to help you. We will fight hard to get you the fair recovery that you deserve for your past and future medical bills, lost income, out-of-pocket costs, pain, and suffering. Call us or fill out our online contact form today to schedule an initial consultation in our Bloomington, Gurnee, or Rockford office or at a location that is convenient for you. We can review your case, free of charge, and help you seek justice with our Win or It’s Free Guarantee!