Today began with a flurry of activity as the riders lined up by classes. Starting out first, Class 1 are the oldest machines with the smallest engines. They were followed by Class 2 motorcycles, which left 30 minutes later. Class 3 motorcycles, mostly 1916 vintage year, left 60 minutes after class 1. Even with an hour start advantage, the “newer” motorcycles will likely pass all of the class one motorcycles midway through the day’s course. Day One had taken its toll on a number of the machines, with 28 starters seeing the back of the trailer.  Most of the breakdowns were able to be tweaked or fixed overnight while others were still being worked on as the first riders on Sunday started off. The day included more rural riding with higher     elevations (300 to 3000 ft.) and an increase in miles traveled.

The riders were eager and ready with first riders out on the road at 7:30 am.  Everyone able was rolling by 8:45 am. Sunday’s route would take competitors through three states, starting in York, Pennsylvania, hitting parts of Maryland and ending in Morgantown, West Virginia.

I watched as the motorcycles left and cheered some of them on, then took my luggage to my new awesome friends chase vehicle, relieving me of the daily task of securing everything to my bike each morning.   The morning was beautiful with heavy dew and a starting temperature of 74 degrees. For the first 41 miles I had to check several times to be sure I was on the correct course, periodically checking the 13 pages of written instructions we received at the morning staging area.

As we traveled across Eastern Pennsylvania, the elevations began to increase. I was amused by some of the street signs: Possom Hollow, Peepytown Rd., and one sign in particular that caught my attention.  Just before I had a spiritual encounter with some birds in Biglarsville, I saw a sign that said “Love Unlimited”.  I was jarred back to reality when I came upon a rider, #62, Scott Blaylock from Canada on his 1910 Indian.  His 1.75hp motorcycle strained and did not want to climb the increasing altitude of the hills. We pondered what to do when Joe Sparrow arrived with a rope and towed him to the top. Success! At mile marker #48 I smelled the exhaust of another rider’s bike before I saw him. Sure enough, there was #100 alongside the road with some support staff. Pat Simmons was having trouble with his bike but it looked like they had it handled. At mile marker #61, rider #16, Chris Knoop on his 1914 JAP was working on some problem with his shifter, but appeared about ready to head out. The higher elevations were beginning to take a toll on the bikes. 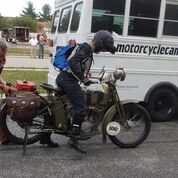 I chose to fuel up at one of the recommended gas stops, heeding the written warning on our 13 pages of turn by turn instructions that said “ Next refueling stop 75 miles”.  Many riders decided to make some adjustments to their bikes at this stop. I sat in the dirt next to my friend Ziggy as he wrenched, sharing stories about crows, when suddenly we heard an engine revved and a woman’s voice yelling. I turned to see Sharon Jacobs bouncing off the sidewalk of the gas station narrowly missing a van as she pulled her clutch and came to a stop. Five fellow riders surrounded her bike in seconds and helped her off.  Doug Wothke made a few adjustments to her bike and after a quick bandage to her finger she rejoined her group. About 15 minutes later I decided to continue on the route. I passed Sharon and Scott just a little while later on a steep grade with support staff, apparently having more mechanical problems.

About 20 minutes later my cell phone rang and I pulled over to answer it, as that’s my line of communication with other support staff members.  The caller told me a bike was down at a cross road about eight miles in back of me. I suspected immediately which intersection this might be, since I had noticed a lot of gravel at a stop sign at the base of a hill. I turned around and made my way back before the ambulance arrived. Scott Jacobs was on the shoulder of the road with his wife at his side, along with support staff and members of the local fire department. Fortunately, Scott was not critically wounded although he was transported to the hospital.

I rode to the hospital to check on his condition, and later made the 80 mile ride to the ending location for the day. I missed the hosted lunch in Cumberland, MD and the evening dinner hosted by Triple S Harley Davidson, but my duties as medical support take precedent over everything else.  Artist David Uhl was at Morgantown, WV demonstrating his painting style to the enjoyment of the riders.  Felicia Morgan, official photographer and media for the Cannonball, provided me with some of her pictures so I could complete my blog for Day 2.

Stay tuned as tomorrow we travel to Chillicothe, OH. 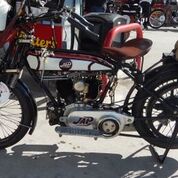 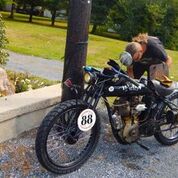 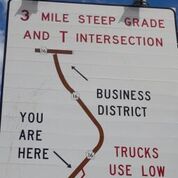 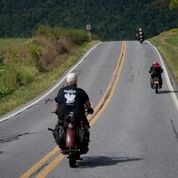