February 17-19 was a weekend of motorcycle madness, culminating with a planned ice racing competition at the McKinley Marina on Milwaukee's lakefront. 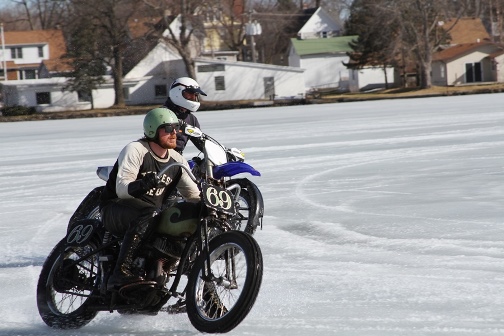 Through the flat track races at the BMO Harris Bradley center on Friday night and the exceptional custom motorcycle exhibit in the Lindsay Building on Saturday, anticipation of a thrilling conclusion on the ice was building in everyone's mind. With the temperature edging upward each day, by Sunday morning's 61 degree temperature, it was obvious that nobody was racing at the Marina. The open water and lack of ice guaranteed that. But nothing is obvious when you have a group a maniacal riders, some from parts of the country that never see frozen lakes, hellbent on finishing the weekend in style.  Somehow, they found a frozen lake 60 miles outside of Milwaukee. Sinissippi Lake in Hustisford afforded just the right amount of solid H2O to allow the ice capades to proceed.

Last year, a race of sorts was also cancelled due to warm conditions and weak ice at the Marina. But, boys will be boys and they found conditions suitable at Lily Lake in Burlington, Wisconsin. They rode around for hours in ever widening circles, testing the strength of the ice and the stability of their machines at lean angles that would have been scary on dry pavement, let alone ice.  This year would have been the first time there would have been an organized ice-riding competition. But the solar gods decided not to honor that wish. So, as has become the custom, they searched out and found frostbound water in Hustisford, and the action began.

It was so warm out that many of the spectators and fellow racers were in t-shirts and some in shorts. The mood was festive, the locals living on the lake came out to witness the fun and shutter-bugs were spinning in circles trying to capture the action.  It was all good fun and lasted into the afternoon as the sun continued to melt away the top surface of the ice and turn it into a slushy field, a foreboding of danger lurking around the next turn.

As luck would have it, instead of one of the motorcycles falling through the ice, it was a spectator who took the icy plunge. Not just a spectator, it was actually the assistant of famed photo-journalist Michael Lichter who fell though the ice.  Lichter, using one of his camera straps, helped a spectator pull the unlucky assistant back onto the ice. It wasn't long after that the riders decided it was time to pack up and dream of next year's icy challenge.