Handling Curves and Braking, On The Race Track and The Highway

Do you attend track day events and practice racing skills?  Do you ride the same bike on the highways and urban roads?

The skills you learn on the racetrack are the same skills you should apply when riding public roads, but there are some differences.  On the track you memorize corners, learn to choose your lines approaching a curve and choosing the apex. It is a controlled environment with optimal surface conditions and no oncoming traffic hazards.

Riding public roads exposes us to hidden hazards, obstacles and unknown curve geometry. Is there debris or spilled oil on the surface beyond our line of sight in a curve?  Is the curve uphill or downhill, does it camphor or have a double radius?

On the road, you have to consider the risk factors that you do not have to deal with on the track. On an open road, it is easy to roll that throttle a little further and ride faster than we sometimes should.  Encountering a curve demands a different mindset than on the track. Racers want to delay applying brakes until deep into a curve, hitting the apex at the precise time they have practiced it, time after time.  On a highway, we have to consider hidden dangers and oncoming traffic. We should be applying the brakes sooner rather than later, establishing a corner line that moves away from the centerline about halfway through the turn. Aiming toward the inside line too soon at speed will cause the bike to move wide through the turn and possibly cross the centerline. Positioning wide before the curve for the best line of sight is essential, avoiding target fixation on the inside line. 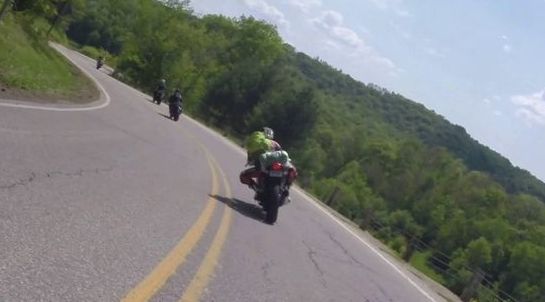 Brakes are on bikes for a reason—use them. Upon approaching a curve, apply gentle and progressive pressure to the rear brake and as the weight transfers to the front of the bike, apply progressive pressure to the front brake. The front is where the real stopping power is. Slowing down to make the turn safely, smoothly release the brakes as the bike leans through the curve. Braking while leaning compromises traction.

Another skill to master is “panic” braking, better termed a “quick stop.”  On the track, you will not encounter left-turning vehicles, pedestrians or other common hazards (although fallen riders or debris from a crash is a consideration).  How fast can you stop your bike?  Only practice will tell.

If congestion is ahead or you are riding on urban roads, being prepared for a quick stop is important. That means keeping your right hand on the brake lever as you anticipate a possible slowdown or stop. That one second of time it takes to grasp the lever in a panic situation could result in an additional 60 feet or more stopping distance, depending on your speed. That could be the difference between stopping short of contact and hitting the side of a car.

Practice will take the fear out of aggressively applying the front brake.  Aggressive rear braking often results in loss of traction as weight transfers forward causing the rear tire to skid. Applying both brakes simultaneously with more progressive force on the front brake is the proper technique to avoid skids. You need to practice this skill every year at the beginning of the riding season, even if the bike is equipped with ABS.

Here is to riding safe on both the track and on the roads. Remember, there is a difference.

Read More About Handling Curves and Braking, On The Race Track and The Highway...