Preparing to visit the Statehouse

ABATE of Wisconsin has been visiting the State Capitol since 1974, successfully changing laws or creating new laws affecting motorcyclists. That success did not happen by accident.

Over the years, experienced members have passed on knowledge about the proper techniques to use for positive results. Those person-to-person consultations have evolved into today's lobby training seminars and workshops. Every year, ABATE visits the State Capitol in Madison and presents its position on proposed legislation as well as asking for amendments to existing laws or asking for new legislation to meet the needs of the state's motorcyclists. Over 500 leather-clad motorcyclists attend these yearly lobby days. Besides prearranged meetings in hearing rooms, all of those in attendance are encouraged to reserve private meetings with their own particular representatives in the Assembly and Senate during the lobby day visit.

ABATE visits every office representing every Senate and Assembly district in the state. Paramount to success is relaying a single message to legislators.  ABATE's concerns are motorcycle related and no other issues are brought up. Several training workshops are conducted around the state informing members of which issues will be discussed, ABATE's point of view on each subject and talking-points distributed so members deliver the same message.

One such training exercise took place on January 19, four days before the scheduled Biker Day at the Capitol. Hosted by House of Harley-Davidson, a local dealership, members heard from Executive Director Dave "Chubby" Charlebois, and Deputy Director John Reblin, on what issues would be brought to Madison this year. In addition, addressing the attendees was Steve Panten, ABATE's Legislative Chairperson. These were the best of the best conducting this particular session. This year's concerns include proposing legislation to legalize poker runs under a Class B raffle license. These events are important fundraising tools to help defray operation costs of the organization. 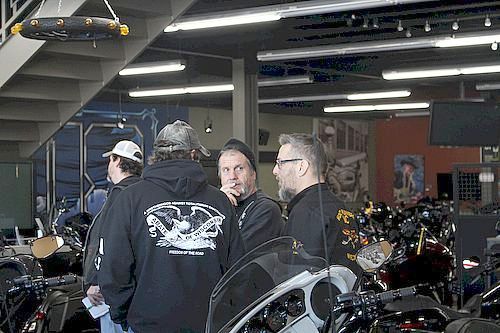 On the national scene, the U.S. Senate passed S. Resolution 154 in 2017, which encouraged law enforcement agencies to recognize that profiling of motorcyclists due to dress and manner of transportation exists nationwide. Wisconsin has seen an increase in the number of motorcycle clubs labeled as "outlaw" organizations. Currently, ABATE is discussing the problem with certain law enforcement agencies in the state, but if there is a lack of cooperation in recognizing the problem, ABATE is prepared to seek relief through legislation, similar to successes in Washington State and Maryland.

Because of the intelligent approach used in Wisconsin, ABATE remains a leader in local legislative pursuits as well as leading the way on national legislation through its membership in the Motorcycle Riders Foundation (MRF) in Washington, D.C.

Read More About Preparing to visit the Statehouse...